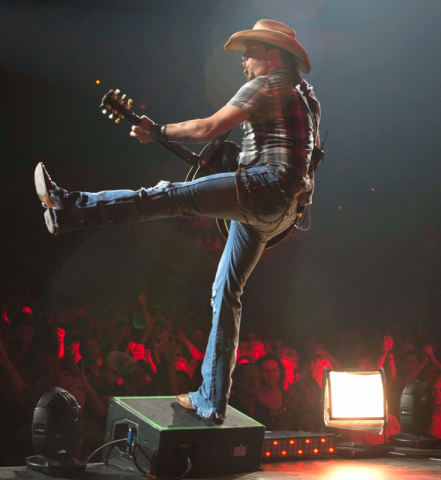 MULTI-PLATINUM entertainer Jason Aldean has been on a strong and steady climb, breaking all-genre sales and touring records in over 40 venues over the last two years, with no sign of slowing down.  Today the CMA and ACM Award winner announced he will kick off the first leg of his 2013 Night Train Tour in Bossier City, LA on Feb. 21 and roll on to 23 cities through May. Special guests Jake Owen and Thomas Rhett will jump on the ‘Train’ with Aldean in 2013.

“The thing I’m most excited about for next year is getting to add some new songs off the ‘Night Train’ album into my show,” said Aldean.  “As a musician, it’s great to be able to shake up the set list and think of cool ways to present these new songs in the live show.  We’re already working on some cool production ideas, and we’re going to come back from the holidays ready to go.  I’m a big fan of both Jake and Thomas Rhett, so it’ll be awesome to have those guys out with us.”

Aldean solidified his stadium headliner status when the first announced stadium dates of the 2013 Night Train Tour sold out in just minutes at the on sale over the past three weeks.  In 2013 Aldean will play to sold out crowds at the University of Georgia’s Sanford Stadium in Athens, GA (4/13), with a two-night stand at Boston’s Fenway Park (7/12 and 7/13) before heading to Wrigley Field in Chicago.

For a full list of appearances and more information on NIGHT TRAIN, please visit www.jasonaldean.com.