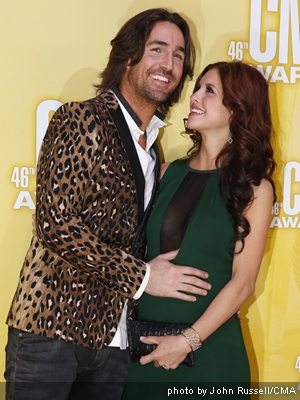 Jake Owen is riding high in so many ways these days, both professionally and personally, with his lovely wife Lacey expecting their first child — a daughter they’re naming Olive Pearl Owen — due later this month. Jake couldn’t be more thrilled about the baby on the way, and he says that he can’t wait to get to know everything about her — and he definitely plans to be a proud papa with the photos!

With the new family addition on the way, Jake’s also thinking about the feelings of another family member: his bulldog, Merle. “Yeah, I’m a little…I’m worried that, you know, Merle’s… Merle’s gonna get his feelings hurt a little bit. He already looks sad enough ’cause he’s a bulldog, but he also really likes kids. He’s fascinated with kids, and he loves playin’ with ‘em, and so it could be cool. I can’t wait. I really can’t wait ’til she’s big enough where she can sit on the couch, and he can sleep right next to her, and the two of them, the same size, can lay there together, and I can take photos.”

And among the cool things going on right now in Jake’s career, he is a four-time nominee at this year’s American Country Awards, where he’s up for Single of the Year: Breakthrough Artist, Music Video of the Year, and Music Video: Male — all for his number-one smash, “Alone with You.” In addition, Jake is also up for Artist of the Year: Breakthrough Artist. Time is running out, though, for you to cast your votes, with online balloting remaining open until Monday, November 12th, in all but one of the ACA categories. You can get in a few more daily votes for all your favorite nominees at TheACAs.com. Catch the big show, hosted by Trace Adkins and Kristin Chenoweth, when it airs December 10th, at 8pm, ET, on FOX.

Earlier this week, it was announced that Jake will hit the road next year on Jason Aldean‘s Night Train Tour, beginning in February — but right now, Jake is racking up the sellouts headlining his own red-hot CMT on Tour dates with special guests Love and Theft and Florida Georgia Line. For upcoming shows, check out JakeOwen.net!