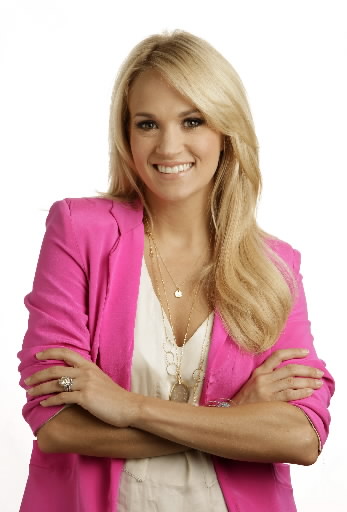 Five-time Grammy winner Carrie Underwood will star in the coveted role of Maria von Trapp in NBC’s live broadcast of “The Sound of Music,” based on the original Broadway musical, it was announced today by Robert Greenblatt, Chairman, NBC Entertainment. The live telecast of “The Sound of Music” will be a three-hour event on a date to be announced near the holidays in 2013.

NBC is partnering with the acclaimed “Smash” producing team of Craig Zadan and Neil Meron (film versions of the Oscar-winning “Chicago” and “Hairspray”) for “The Sound of Music.” The pair also is producing the upcoming “85th Annual Academy Awards.”

“Speaking for everyone at NBC, we couldn’t be happier to have the gifted Carrie Underwood take up the mantle of the great Maria von Trapp,” said Greenblatt. “She was an iconic woman who will now be played by an iconic artist.”

“We’re thrilled to be presenting the Broadway version of ‘The Sound of Music’ live,” said Zadan and Meron, “and having Carrie Underwood as the star brings it to a new generation who will fall in love with it for the first time as many millions of people already have. It’s a particular joy to us as producers to see this amazing artist stretch into new territory with this classic musical.”

“To have a star like Carrie Underwood perform Maria in ‘The Sound of Music’ – and in such a very special and unique production — is exciting beyond words,” said Ted Chapin, President, Rodgers & Hammerstein. “Part of the magic of Rodgers and Hammerstein is how their work has adapted itself to so many different incarnations, and I am certain the fresh spirit Underwood brings to her own songs will transition into exciting versions of the classic songs we all know and love.”

“The Sound of Music,” set in pre-WWII Austria, is based on the romantic true story of Maria von Trapp, an aspiring nun who leaves the abbey to become a governess for the widower Captain von Trapp’s seven children and finds herself falling in love with her employer and questioning her religious calling. It premiered on Broadway in 1959, where it broke box-office records and won the Tony Award for Best Musical. The 1965 film version won the Best Picture Oscar. Today it is an evergreen classic — as popular in opera houses and outdoor amphitheaters as it is in high school auditoriums. “The Sound of Music” features a libretto by Howard Lindsay & Russel Crouse and a score by Richard Rodgers (music) and Oscar Hammerstein II (lyrics) that includes “My Favorite Things,” “Do-Re-Mi,” “Edelweiss,” and “So Long, Farewell.”

With more than 15 million albums sold worldwide, 16 #1 singles (seven of which were co-written by Underwood) and five Grammys, Underwood is fueled by a restless creative spirit as she released her most ambitious project yet in her current platinum-selling album “Blown Away.”