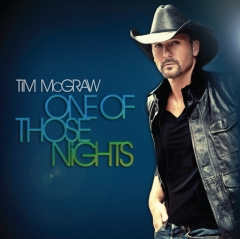 Country music icon Tim McGraw announced today that his first album on Big Machine Records TWO LANES OF FREEDOM will be released Feb. 5, 2013.  The new single “One Of Those Nights” will make its national television debut on ABC’s live broadcast of the 2012 CMA Awards this Thurs. night, as it will simultaneously be delivered to country radio.

“I always go into the studio to make the best record I can possibly make, and this one is no different.  But ‘Freedom’ is a powerful word,” said McGraw.  “To come into a situation where there’s some weight lifted, some refreshment going on, you can feel that in the music.  I think you can feel the horses gallop on this record, and where I might go and what I might do when my engines are revving.”

For twenty years, McGraw has been providing a powerful connection with his audience. With TWO LANES OF FREEDOM, the singer returns as co-producer with long-time friend Byron Gallimore. The album covers his broadest emotional range yet, with a set of songs that looks forward and back, gets deep and gets loose, and reveals that even the biggest stars can continue to grow with consistency and maturity.

“I feel like we really found some great songs for this record, and ‘One Of Those Nights’ perfectly sets the tone for the project,” explained McGraw.  “It’s about reflecting on old times with a sense of nostalgia, but it’s also about creating new memories and living in the moment and looking towards the future.  I am doing that in my own life and career now, and I can’t wait for my fans to hear the single and album.  It’s an unbelievably exciting time for me!”

Fans will have the first chance to preview the upcoming album’s carefree new single “One Of Those Nights” today when McGraw appears on The Ellen DeGeneres Show.  He’ll also surprise some unsuspecting fans in Las Vegas and chat with Ellen about the new album (check local listings).

For more information on the new album and single, visit timmcgraw.com.