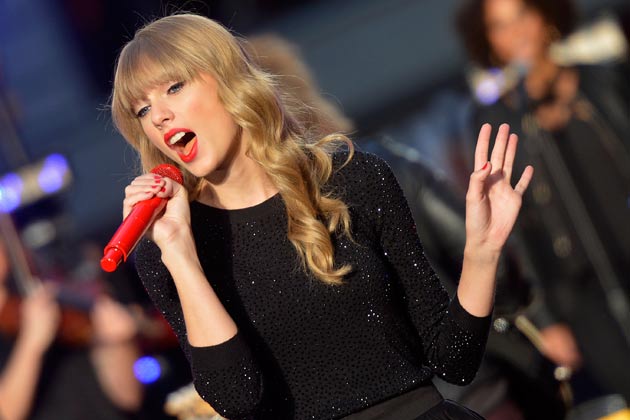 Taylor Swift announced Friday that she will launch a North American stadium and arena tour in early 2013 in support of her blockbuster new album, RED. Taylor made the special announcement in partnership with ABC News on  Friday night’s primetime TV special “All Access Nashville with Katie Couric – A Special Edition of 20/20.” RED was released this week to widespread worldwide critical acclaim and has already topped the iTunes album sales charts in 40 countries.

On The RED Tour, Taylor is currently slated to headline 58 shows in 45 cities in 29 states and 3 provinces in 2013. The tour will kick-off on March 13 in Omaha, Nebraska and continue through September. Acclaimed singer/songwriter Ed Sheeran, whose duet with Taylor from her RED album, “Everything Has Changed,” has already reached the #1 position atop iTunes all-genre Top Songs chart, will be a special guest on all of the shows on the tour.

The RED Tour will be produced and promoted by The Messina Group (TMG). At Taylor’s request, every show will include tickets priced at under $50. The first tickets will go on sale on November 16th, and on-sale information is available now at www.taylorswift.com and www.abcnews.com. TMG is a partner of AEG Live, one of the top live entertainment companies in the world, which produces world tours featuring internationally renowned artists and regional concerts and festivals.

Taylor’s RED Tour is set to be one of the most-anticipated musical events of 2013, as Taylor’s live shows are renowned worldwide for bringing her music to life with what Variety has dubbed “supreme spectacle” and Billboard has hailed as an “overwhelming experience…that blended the pacing, the music and the artist’s personality in a way that transfixed.” During the course of every show, Taylor plays a variety of instruments and performs her biggest hits and fan favorites from her four Big Machine Records albums.

“I didn’t think I could be any more excited about my RED album, but then I start thinking about how I’m going to put the new show together for The RED Tour,” says Taylor. “I have so many ideas about how to really bring this music to life, and I can’t wait to share the new show with all my fans!”