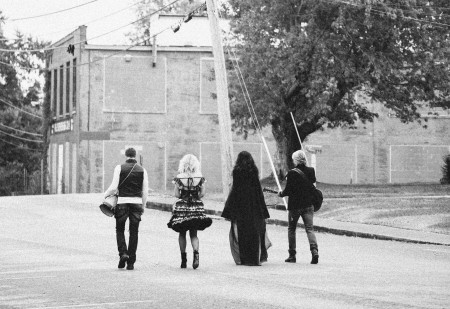 The countdown is on for the exclusive world premiere of Little Big Town’s new video, “Tornado,” on Wednesday, October 31 at 6:00 a.m. ET on CMT, repeating every hour throughout music hours.

“Tornado” was filmed in Watertown, Tenn., and is a highly symbolic, visually eerie and thrilling portrayal of Little Big Town’s latest single and title track “Tornado.”  Actor and friend of the band, Johnathon Schaech (That Thing You Do!, Takers, Prom Night) serves as co-star and brooding antagonist to Little Big Town’s sexy and commanding foursome.   With visuals that portray a classic Americana landscape and with dramatic fashion styling, the video of “Tornado” yields the power of its name and is the tale of a woman scorned.  “Tornado” was directed by Shane Drake, who has also worked with such artists as Kelly Clarkson, Daughtry and Panic at the Disco.

Little Big Town will be featured on CMT all week long and will appear on CMT RADIO LIVE WITH CODY ALAN to promote the world premiere on Tuesday, October 30. “Tornado” will also be highlighted during CMT TOP 20 COUNTDOWN as a Bonus Video on Friday, November 2.  The video premiere will be promoted across all of CMT’s digital platforms including CMT.com, CMT Pure, CMT Mobile and over 3 million social media fans.

Fans can also expect more big news from Little Big Town on Wednesday, October 31 regarding the band’s 2013 tour plans and an exclusive offer from CMT. Check littlebigtown.com and CMT.com at 10 a.m. CT for the news.