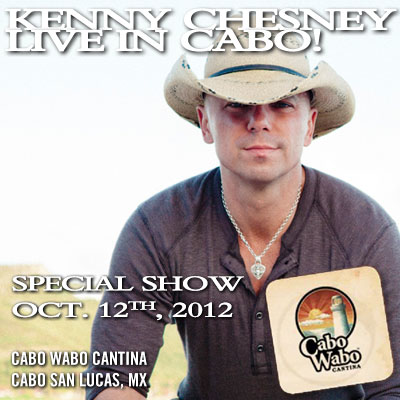 Sammy Hagar knows there’s only one way to rock AND throw a party and that’s by gathering his superstar celebrity friends to blow it out.  For over twenty years he’s hosted his epic, star-studded Sammy’s Birthday Bash in Cabo San Lucas, Mexico and this year’s 65th birthday celebration will see his Cabo Wabo Cantina rocking a little harder with one of the biggest names in country music, Kenny Chesney, on hand to perform a one-night only concert Friday, October 12.

Chesney first rocked one of Hagar’s legendary birthday bashes in 2004, where his whole band and crew set the club record for performance time – 3 hours and 40 minutes.  This year looks to be as rousing when Chesney again takes the stage.  “I’m so fired up!!” said Chesney about hitting Cabo Wabo with Hagar, who is equally as galvanized about reuniting, saying “What an awesome birthday present – I can’t wait to rock with Kenny and the fans!”  Fans lucky enough to score one of the limited 500 tickets can be sure Chesney and Hagar will deliver the high-octane performances for which they’re known.

Kenny Chesney’s birthday concert will also be an amazing added bonus for the VIP winners of the “Ultimate Birthday Celebration with Sammy Hagar & Emeril Lagasse,” a charity package auctioned off each November in New Orleans at Emeril Lagasse’s Carnivale du Vin fundraiser.  On October 12, they’ll dine at Sammy’s beachfront home with a dinner prepared by Chef Lagasse, followed by VIP access to a private balcony at Cabo Wabo Cantina for Chesney’s concert.

The unforgettable four-day juggernaut that had fans of the Red Rocker running for the border, kicked off October 7 with Sammy and his band the Wabos, followed by shows on October 9, tonight, October 11 and on Hagar’s official birthday, October 13.