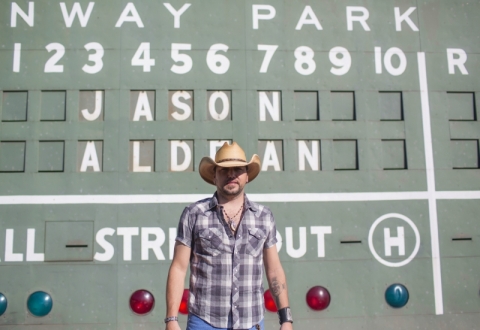 “When we started talking about playing stadiums, my only request was to play venues that were special and really meant something to me,” explains Aldean.  “At 100 years old, Fenway Park is one of the most iconic baseball stadium in the country and there is absolutely nothing in the world that could be more special than selling that place out…as an entertainer and as a huge baseball fan.  This has been the most unbelievable week…all I can say is THANK YOU.”

Aldean announced the date last Thursday when he jetted across the country and made surprise appearances at Fenway, Chicago’s Wrigley Field and the University of Georgia’s Sanford Stadium to announce that his 2013 NIGHT TRAIN TOUR would stop at each of the three stadiums.

Fresh off a record-breaking debut of his new album NIGHT TRAIN which sold 409,303 copies its first week, the next stops on the NIGHT TRAIN include Aldean’s annual “Concert For the Cure” to benefit Susan G. Komen for the Cure on Oct. 27 and the 2012 Country Music Association Awards on Nov. 1, where he is nominated for “Entertainer of the Year,” “Male Vocalist of the Year” and “Single of the Year.”