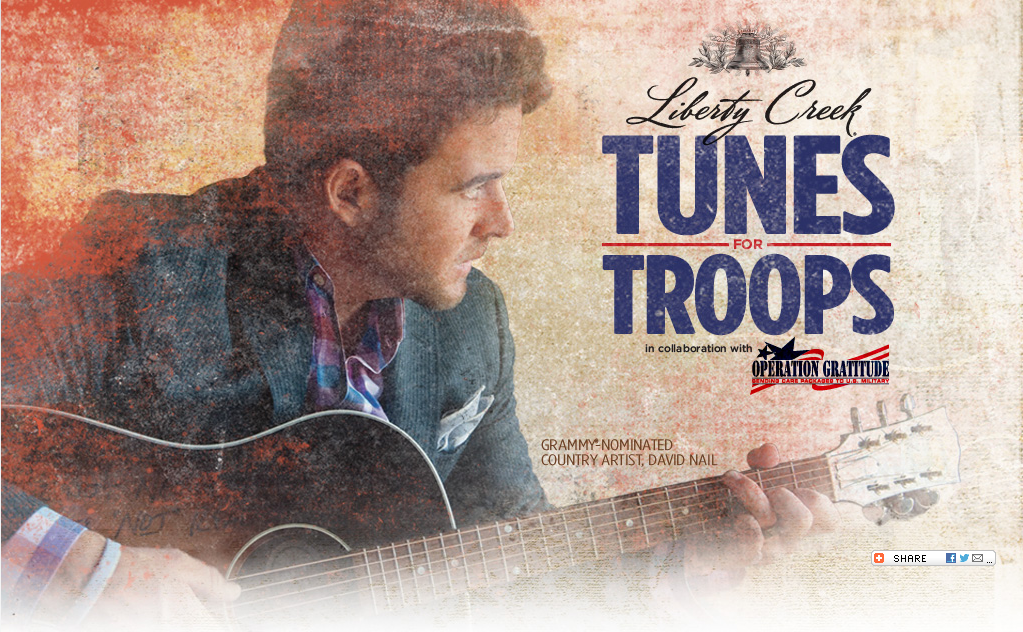 David Nail has always believed that music can make a difference in people’s lives. The Grammy-nominated vocalist, who’s currently headlining a small hall and large club tour, is now teaming with the people from Liberty Creek to anchor their Tunes for Troops program, which is part of the larger Operation Gratitude.

“I’m honored to be part of Liberty Creek’s Operation Gratitude program,” Nail says of his involvement, “It’s humbling and gratifying to think of my music as part of sending care packages to our troops stationed overseas. They do so much for us, and it’s easy to forget their sacrifice… This is one small thing that lets them know we know they’re out there, and appreciate all that the servicemen and women do for this country.”

Kicking off this month – and running through the end of the year, consumers who buy specially tagged bottles of Liberty Creek will actually see their purchase sending a copy of Nail’s critically-acclaimed The Sound of a Million Dreams being included in the care packages Operation Gratitude sends the troops stationed overseas during this holiday season.

“We are delighted to receive this support from Liberty Creek Wines and David Nail, and we believe the CDs will make our care packages even more meaningful,” says Carolyn Blashek, Founder of Operation Gratitude. “Country music speaks to themes that reinforce the simple pleasures in life—home, friends, family and loved ones, which can be comforting to a soldier who is far from home, especially during the holidays.”

In addition to providing copies of Dreams, Liberty Creek is also donating $15,000 to Operation Gratitude for this project. Will Purvis, Liberty Creek Brand Manager says, “Here at Liberty Creek Wines, we want our troops to know that we appreciate the sacrifices they are making each and every day, especially during the holiday season. It’s our privilege to partner with Operation Gratitude and David Nail, to help provide some holiday cheer during a difficult time to be away from loved ones.”

With Nail’s 1979 EP generating response in odd places – WUSN in Chicago has added his version of Adele’s “Someone Like You” as his upcoming Joe’s Bar show sold out seven weeks in advance, Blair Garner played it on his nightly nationally syndicated  “After Midnight”  off the YouTube stream and CMT is giving the clip, which was done solely for the fans, rotation on their various outlets – the man whose “Let It Rain” became the longest rising #1 in any genre in Billboard chart history is continuing to find ways to let his music give back to the fans.

“Music brings people together,” says the Kennett, Missourian. “That’s the most powerful thing about it… When I sing, I can see it on people’s faces. They know. They’ve been there – and if this does that for the troops, I am truly humbled to be a part of Operation Gratitude.”