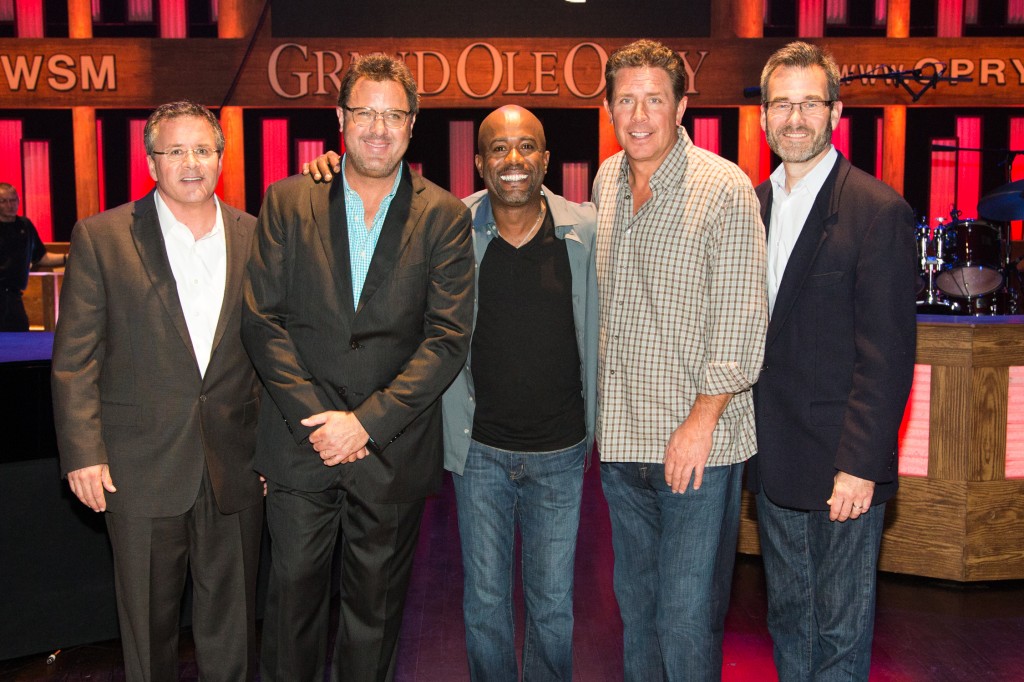 Darius Rucker became the newest member of the Grand Ole Opry Tuesday night (October 16th). He performed a pair of his No. 1 hits, including “Alright” and “Don’t Think I Don’t Think About It” before Opry General Manager Pete Fisher and Opry member Vince Gill helped present Darius with his Opry award, a 14-inch bronze replica of the Grand Ole Opry microphone stand. Vince told Darius that the award is probably the most proud thing he has because of what it represents. “It represents the entire history of this music,” said Vince. “I don’t think there’s a more beloved guy in our music than you. I think everyone adores you…before you even open your mouth and sing.” Vince then thanked him for wanting to be a country music singer.”

After a standing ovation, an emotional Darius said, “This is a labor of love for me. I love country music!” Darius thanked the Opry, the fans, his label, his producer and his wife and children. A tearful Rucker responded to Gill’s words and a standing ovation from the audience, saying, “Thank you very much. … I was sitting in here at rehearsals today, and there was nobody in here, and I looked up in the stands. I thought to myself, ‘Somewhere in those stands right now my mom is looking at me.’ And it just blew me away to be here today. …This means more to me than I could ever say to you.”

His labelmate and most recent Opry member, Keith Urban, videotaped a message to Darius welcoming him into the family, before he walked out to surprise him live on stage.

Another friend there to celebrate with Darius was football icon and former Miami Dolphins quarterback Dan Marino was in the wings with his wife to cheer him on. He wrapped up the live GAC-TV coverage of his induction with his latest smash, “True Believers,” which he dedicated to the football hero.

It was just two weeks ago to the day when Brad Paisley had the idea for the fake Question and Answer segment in an effort to issue the invitation to Darius, who said earlier in the day that the honor was still “surreal.”

“It meant so much to me ‘cause I knew if I ever could be a member then there’s no more conversation about being accepted or anything. I’m in,” said Darius. “You look at the names of the people that have been inducted, and they’re legends. They’re legends. They’re modern day legends and old-time legends. And for me to now be right next to them, shoulder-to-shoulder to them, that was something I dreamt about and now it’s a dream come true.”