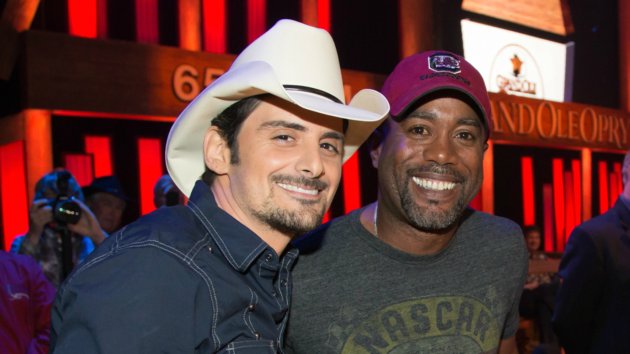 Award-winning country music artist Darius Rucker was invited to join the Grand Ole Opry last night by Opry member and friend Brad Paisley. He will formally be inducted into the Opry on Tues., Oct. 16. That show will air live on “Noteworthy at the Opry” on GAC at 8 p.m. Central.

After Rucker had performed his hits “Alright” and “Don’t Think I Don’t Think About It” as well as his current single “True Believers,” Rucker agreed to field questions from members of the audience. After answering questions posed by two fans, a third “fan”, Opry member Brad Paisley, appeared in the audience with a two-part question. First question: “Are you still the worst poker player in the world?” Second question: “Would you like to be the newest member of the Grand Ole Opry?”

Managing an “Oh, you’re kiddin’ me,” “Yes, I would!” and “Wow!,” Rucker embraced Paisley, who added, “Welcome him home, everybody! This is his new home right here!”

After Rucker performed “Wagon Wheel” and Paisley performed a set of his own, Rucker returned to the stage saying, “You guys got to share one of the most special nights of my life tonight.” Addressing his new Opry family, he added, “Thank you for opening your arms and letting me in.”

“We are extremely excited that Darius will be joining our Opry family,” said Opry Vice President and General Manager Pete Fisher. “He’s forged an incredible, diverse musical path which has led today to the top of the country charts. It’s been clear from the moment Darius first stepped on our stage in 2008 in what high regard he holds the Grand Ole Opry and similarly how much Opry fans love Darius’ music. We look forward to him becoming an official Opry member in just a couple of weeks.”