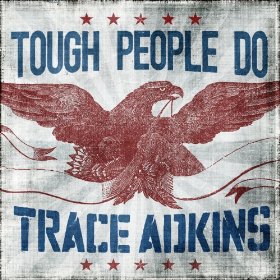 Trace Adkins’ latest anthem, “Tough People Do,” was rushed to all digital retailers over the holiday weekend. The race to make the song available followed Adkins’ live performance of the song in Tampa, FL on 8/28 at a charity event following the RNC.

Introduced by Trace as a “song for all of us,” the red-white-and-blue message that “tough times don’t last, tough people do” resonated immediately. Talk radio began playing the song and media asked, “is this a political anthem or simply an American anthem?”

As Trace told ABC News Radio, “I’m just really proud of the song, and to me, the song just says — sometimes we need to be reminded of who we are, where we come from and what our history is. We’ve made it through tougher times than this.”

It is a relevant message of encouragement as Americans everywhere face extreme economic times, natural disasters and the everyday struggles of raising families and getting by. The reknowned Country star has overcome many personal obstacles of his own and he told USA Today’s Brian Mansfield that he was reminded of the example set by his own lineage while recording the song.

“My grandma was the toughest old woman I ever saw in my life,” Trace told Mansfield. “She’d still work in the garden with an old push-plow until her late 70s. Just the toughest old woman I ever knew and, at the same time, the godliest creature that I ever knew. That’s the point of this song. That’s what we have in our DNA. That’s what we come from.”

“Tough People Do” was written by Chris DuBois, Jason Matthews and Joel Shewmake and will appear on Adkins’ upcoming album (title and release date to be announced).

“Tough People Do” is available on iTunes NOW by clicking HERE.

Most recently, Trace premiered his new GAC series, “Great American Heroes,” which spotlights everyday Americans making an extraordinary impact in their towns. As announced last week, Adkins will host the American Country Awards for the third consecutive year on FOX in December.