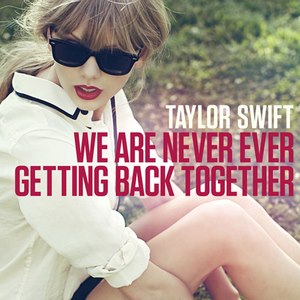 “We Are Never Ever Getting Back Together,” the lead single from 6-time Grammy winner Taylor Swift’s forthcoming album, Red, this week spends its third week at #1 on Billboard’s Hot 100 all-format singles chart, which factors in both sales and radio airplay. The single has been certified Platinum by the RIAA.

Since its release on August 13th, “Never Ever” has sold in excess of 1.4 million downloads in the U.S., and made more than 385 million all-format audience impressions at radio. The song’s debut sales of 623,000 downloads was the biggest opening-week for a song by a woman in SoundScan history, and the second-biggest debut ever. Worldwide, the single has already reached the #1 position atop the iTunes charts in 32 countries. The song is also #1 for the fourth consecutive week on Billboard’s all-genre Hot Digital Songs chart.

Billboard reports: “The three weeks at #1 for “Never” represent the longest Hot 100 reign for a country title since Kenny Rogers’ “Lady” led for six weeks, beginning Nov. 15, 1980. Not only does “Never” boast the longest Hot 100 domination for any country song since “Lady,” but it also scores the longest such lead by a woman since Debby Boone arrived with her 10-week Hot 100 No. 1 “You Light Up My Life,” which also rose to No. 4 on Hot Country Songs, in 1977.”

Taylor also scored this week’s Hot 100 highest debut, as her charity single, “Ronan,” charts at #16. Taylor performed “Ronan,” an unreleased, never-before-performed song about a very special little boy, on last week’s “Stand Up To Cancer” telethon. 3-year old Ronan Thompson passed away last year after battling neuroblastoma. Taylor followed his mom’s blog and wrote this song for his family. She credits Ronan’s mom, Maya, as a co-writer on the song, as her strength, her words, her hope, and her beautiful little boy were the song’s inspiration. The song was made available on iTunes immediately following Friday’s Stand Up To Cancer broadcast, and reached the #1 all-genre position within hours. All of Taylor’s proceeds from the song will go to cancer-related charities. “Ronan” will not be on Taylor’s forthcoming studio album, Red.

Taylor is in Brazil this week doing pre-promotion for Red, which will be released on October 22nd on Big Machine Records in the U.S., Canada, Australia, and Japan, and in conjunction with Universal Music Group International in the rest of the world. Universal Republic handles non-country radio for the project in the U.S.