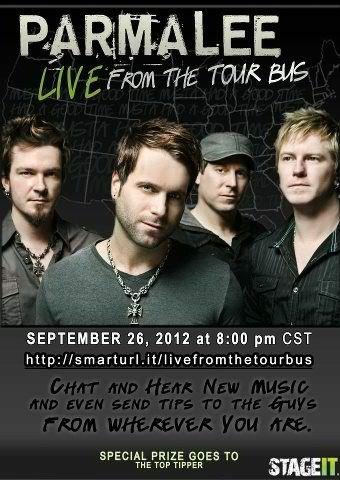 The country rock foursome will play music for their fans, including their Top 40 country radio hit, “Musta Had a Good Time,” which debuted this week at #7 on CMT’s PURE 12-Pack Countdown (week of Sept. 21).

Fans can log on HERE to watch the show. A special prize will go to StageIt’s top tipper for the show.

“Musta Had A Good Time” was recently voted by Country fans as the #1 song on The Highway’s “The Hot 30 Live” countdown for four consecutive weeks. The song has sold over 100,000 downloads to-date. “Musta Had a Good Time” has been featured in national sporting event broadcasts for the PGA and MLB.

Parmalee has been featured in USA Today, Country Weekly, and AOL’s The Boot and was recently named a Billboard “Bubbling Under” artist.