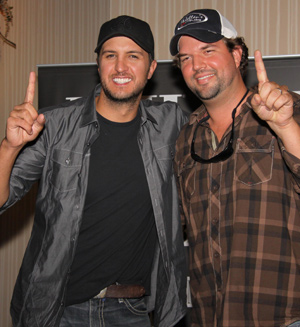 Luke Bryan is set to perform at the 6th Annual ACM Honors in honor of his friend and songwriting partner, Dallas Davidson, who was named the ACM’s Songwriter of the Year Award (which had been previously given out, apparently only once, to Roger Miller in 1965).

“The history between [Dallas] and I is just so deep. It’s amazing that I can have the opportunity to honor him on that night and do some of our songs, and the fact that he and I have even written big hits is just borderline comical,” says Luke, who is currently vaulting up the country charts with his latest single, “Kiss Tomorrow Goodbye.”