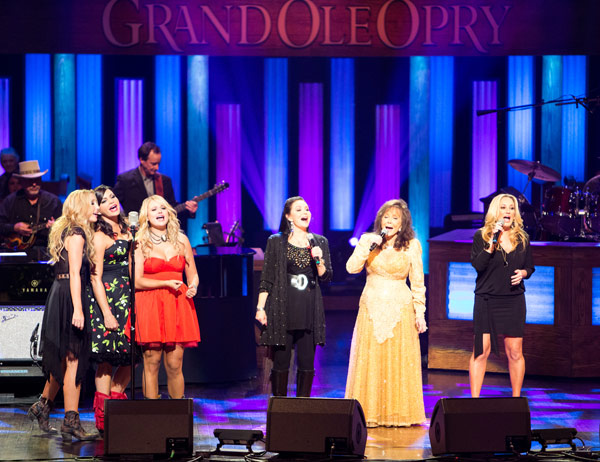 The Grand Ole Opry® presented by Humana® honored one of its most beloved members, Loretta Lynn, last night with a show celebrating her 50th Opry Anniversary. Leading up to Lynn’s closing performance, several of her friends took the stage throughout the night to honor her in words and song.

Among those performing their own hits as well as songs popularized by the guest of honor were Lee Ann Womack (“I Know How”), Crystal Gayle (“Don’t Come Home A- Drinkin’”), Miranda Lambert (“Honky Tonk Girl”), and Pistol Annies (“Fist City”), who made their Opry debut while Lynn sat cheering the group on from the front row of the Opry House.

After Lynn took the stage and performed her hits “They Don’t Make ‘Em Like My Daddy Anymore” and “You Ain’t Woman Enough,” Trace Adkins joined Lynn for the Conway Twitty/Lynn duet smash “Lead Me On.” Womack, Gayle, and the Pistol Annies then all filed on stage to join their musical hero in a rousing version of her signature song “Coal Miner’s Daughter.”

Before Lynn’s final song of the night, Johnathon Arndt of the famed Johnathon Arndt Gallery of Jewels along with Opry vice-president and general manager Pete Fisher, presented the Opry member with a congratulatory gift of a limited Johnathon Arndt 18 KT. pink gold and diamond Swiss timepiece. Lynn responded to the gift and to multiple standing ovations from the crowd, saying, “The greatest moment of my life was when they inducted me into the Grand Ole Opry. That’s a feeling you only feel once in a lifetime. And I’m glad I did.”

Additional highlights from the night can be found at opry.com. The Grand Ole Opry® is presented by Humana®. To plan an Opry visit, call (800) SEE-OPRY or visit opry.com.