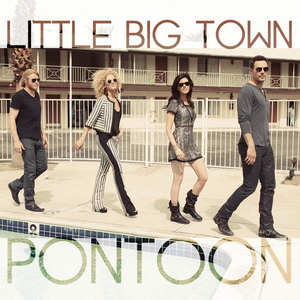 Little Big Town are celebrating their very first No. 1 single this week, as “Pontoon” hits the top of both the Mediabase/Country Aircheck and Billboard country singles charts. The song, the first release from their new album Tornado, was just certified platinum by the R.I.A.A. last week for more than one-million downloads (their first platinum-selling single). The track – written by Natalie Hemby, Luke Laird and Barry Dean — is their fastest selling-single to date and has spent four weeks as a No. 1 country digital download, as well as topping the country chart in Canada just last week.

“Pontoon” is being called the “song of the summer,” and LBT’s Phillip Sweet would have to agree with that assessment. “It’s just fun,” he says. “It feels like summer, and it feels exactly what it sounds like. I grew up on pontoon boats in the summer on the lakes and just having a blast, so it’s good ole clean summertime fun.”

During their 13-year-plus career, Little Big Town has sold more than 1.5 million records, racked up numerous Grammy, CMA and ACM nominations and enjoyed a handful of Top 10 country hits (“Boondocks” and “Bring It On Home” from their platinum 2005 album The Road to Here, and “Little White Church” from their acclaimed 2010 release, The Reason Why).

Little Big Town’s preparing for the release of their highly-anticipated fifth studio album, Tornado, set for release September 11th, with coast-to-coast television appearances, including ABC’s Good Morning America (September 10th) and a performance during the premiere week of The Ellen DeGeneres Show (September 13th). The band will perform on the upcoming ABC Television Special CMA MUSIC FESTIVAL: COUNTRY’S NIGHT TO ROCK (September 17th) and will also be featured on CMT’s Unplugged Series which will premiere on CMT.com September 11th and on CMT September 18th.