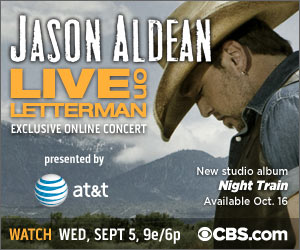 Jason Aldean played a 60 minute set last night, September 5, that was simulcasted LIVE on CBS.com.  The Georgia native was in New York City taping an appearance on the David Letterman Show that will air 9/6/12.  It was announced yesterday that Jason Aldean had been nominated for 3 CMA Awards…Entertainer of The Year, Male Vocalist of The Year, and Single of The Year.

Aldean and his band took to the stage and played twelve songs to the packed Ed Sullivan Theater crowd.  Of the songs played, Jason debuted a couple tracks on his upcoming album, Night Train.  The current single out at country radio, “Take A Little Ride” along with the title track, “Night Train” and “Wheels Rollin’ “ were played to an enthusiastic review.  The album will be released October 16th.

The show featured most of Jason’s big hits over the last couple years of his career.  Aldean told the story of the filming of his first music video for “Hicktown”, and how they all had serious thoughts that they were only ever going to shoot one music video. The result was the band trying to get as much face time as possible.  Little did they know that years down the road, they would be a power player in the country music world.  It just goes to show that hard work does indeed pay off in the end.

With the ever changing media landscape, artists and music labels are reaching out to fans like never before.  With the addition of the internet as a viable player in ways to connect to fans, sites like StageIt.com have become the new go to place to play shows whenever artists feel like it.  Streaming concerts, like the Jason Aldean show tonight, only prove the point that technology is not only bringing us closer to our favorite artists, but allowing us to connect with them in ways never before thought.  I watched the show from a cafe outside of Portland, Oregon, some 2,500 miles away.

After hearing the new songs off of Night Train, I have no doubt that the upcoming album will be another very successful record.  Aldean set the bar high with My Kinda Party and I fully expect him to not only meet those standards, but blow past them.

Pre-order your copy of Night Train now by clicking HERE.

One reply on “Jason Aldean Live On Letterman Concert Review”