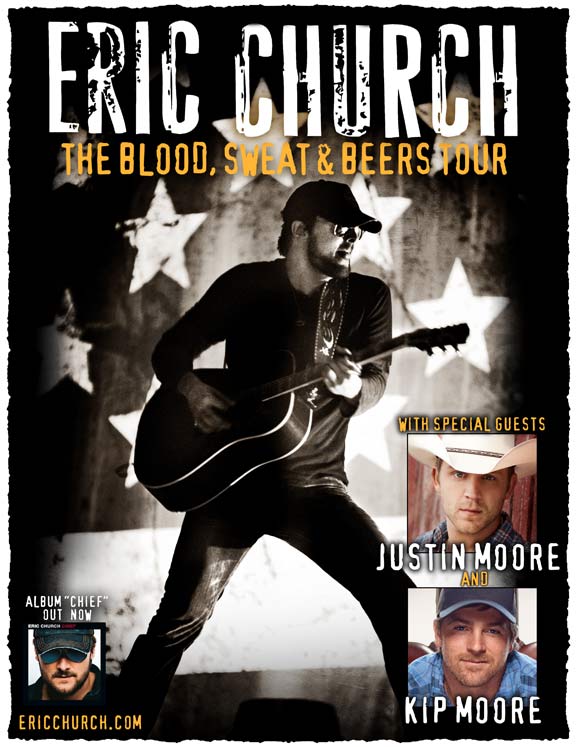 Eric Church kicks off the fall leg of his Blood, Sweat & Beers Tour on Thursday (September 13th) in Amherst, Massachusetts. He’s taking along Justin Moore and Kip Moore as his opening acts. He says he’s looking forward to being on the road with both acts.

“Justin’s been around for a while now. I’ve been impressed with the fact that he’s gone out played bars, played clubs, whether he had a radio hit or he didn’t have a radio hit. He’s been a guy that hasn’t been afraid to go out and work, and build a fan base, and that’s certainly the way that we came up,” says Eric. “With Kip, I’m impressed with just the songwriter sense and his instinct from a songwriter’s side. I like the grit in his music. I think there’s a lot of integrity in the kind of songs that he writes and the way he sings ‘em and the way they’re recorded, so I’m looking forward to get on the road with both those guys. They both done things that I certainly respect their path. Being the guy who kinda took the long way around, it’s cool to have those guys out there and be a part of their journey too.”

During the tour, his two-night stand in Chattanooga on October 8th and 9th, he will record a live album for release early next year.

Eric, who is climbing the country charts with his latest single “Creepin’,” leads the list of CMA nominees with five, including Male Vocalist and Album of the Year for Chief.