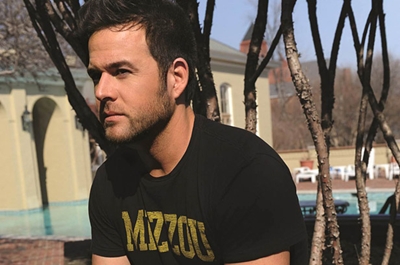 When David Nail took the stage to kick off his fall solo tour, he brought along his white hot band and a battery of songs that say something about the complexity of life in modern times. But he also brought along a new friend: a new tour sponsor in the form of Jagermeister.

“I know it’s not what people would expect,” Nail said with a laugh. “But that’s the thing about Jager… For certain occasions, for certain kinds of events, there’s nothing like it. It’s one of those iconic things, like Levis or great rock & roll, that stands on its own. No explanation needed or necessary.”

The tour is featured in this week’s Billboard, which has already deemed the Grammy nominee and his music “Stunning.” The link for the piece – which examines the quiet vocalist’s touring strategy and desire to take his music to the people can be found here.

The man The Washington Post offered “Nail’s tenor may be country’s most soulful this side of Ronnie Dunn” is looking forward to getting back out there. Most recently seen playing Brooks & Dunn with Keith Urban on “Brand New Man” during a few scattered shows, Nail has toured this year with Taylor Swift, Gavin DeGraw, Lady Antebellum, Billy Currington and headlined a string of shows through the Midwest, Southwest and West Coast.

“There’s something about taking this music to the people,” enthuses the man who made history with “Let It Rain,” the longest-rising #1 in any genre in Billboard chart history. “They get these songs, this take on life that feels like they feel the same way I do… and that idea that we’re all coming together, we’re lifting each other up with music… That’s a lot of why I do this. I do it to feel and to make people feel. That’s the best sensation in the world.”

Having already sold out Chicago’s iconic Joe’s Bar 7 weeks in advance – and WUSN adding his piano/vocal of Adele’s “Someone Like You” from the 1979 ep without it being a single – there is something going on around the artist whose making music on his own terms.

A man living up to his own potential, believing in real life and music that digs a little deeper is exactly the reason a brand like Jagermeister would partner with Nail. A man in full, there is more to his tour than just throwing down and blowing up. It’s about music, forgetting the week, the way life unfolds, being honest and the friends who get you through it. Oh, and a little Jager for good measure.