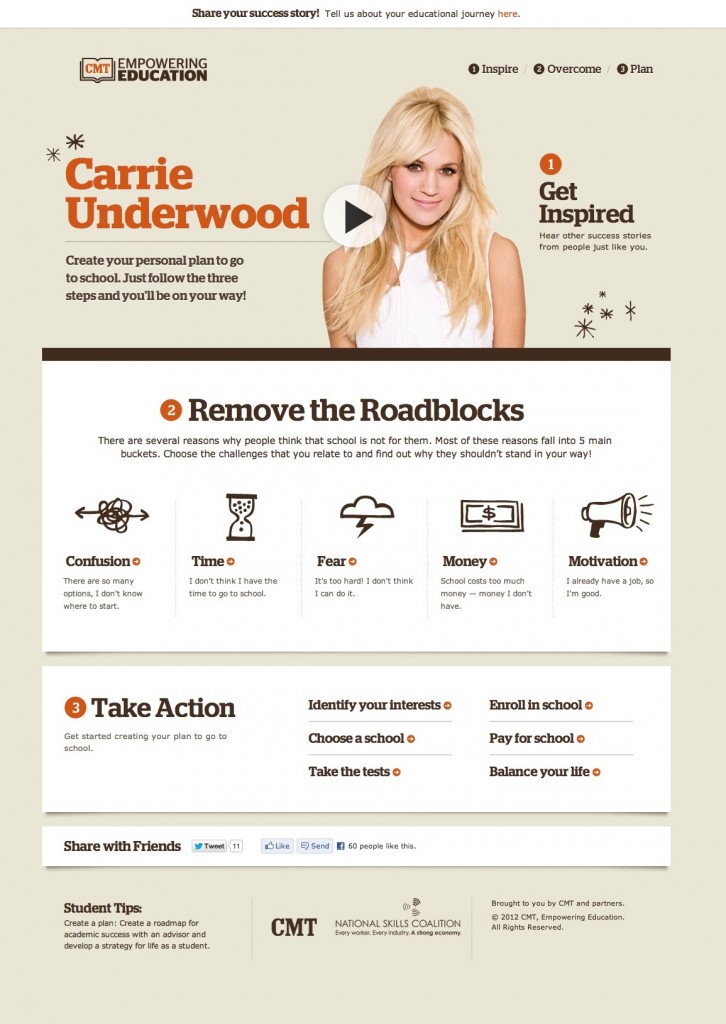 CMT, a unit of Viacom, Inc., has launched a new pro-social initiative, CMT EMPOWERING EDUCATION, which challenges CMT viewers to pursue post-secondary education with the creation of the website, CMTEMPOWERINGEDUCATION.com – a one-stop resource providing information on schools, career paths, motivation and financial resources.

CMT has recruited some of music’s biggest names to motivate and inspire viewers with their own education stories, including Carrie Underwood, Dierks Bentley, Lionel Richie and Luke Bryan, who are all featured on the CMTEMPOWERINGEDUCATION.com site.  Broken Bow’s Dustin Lynch performed at a CMT-hosted event last night in Washington, D.C. to launch the initiative.

Dustin Lynch performed acoustically in front of the invitation-only crowd and spoke of his own college experience:  “I made a sacred promise to my family that I would graduate from college before I pursued my music full-time. I chose to study at David Lipscomb in Nashville so that I could be near Music Row and educate myself about the country music scene while I was also earning my degrees in Chemistry and Biology. So far both educations have paid off – in fact my college degree helped me land a job that supported me during the early days when I was working to earn my publishing and record deals.”

Artist’s quotes featured on CMTEMPOWERINGEDUCATION.com include:
Carrie Underwood:  “My graduation happened a year after I had planned for it to originally… because of all the things I had to get done in order to graduate. It was a great day for me, I was surrounded by friends of mine that I had been going to school with for several years and it was something that I feel like everyone should experience. Everyone should have that moment when they’re proud of what they’ve accomplished.”

Dierks Bentley:  “By getting that secondary education, by going back to college and getting that degree, it’s really a special thing. I would definitely not pass it up ’cause it’s kind of a once in a lifetime thing.”

Lionel Richie:  “College was probably the best adventure ever in my life. Not only was it an opportunity to meet my lifetime, life-long friends forever, but I also met the Commodores on that campus… It was an experience I’ll never forget because its college life, you learn about yourself, about things you never thought that you would do and say and how to handle yourself, it was just the best of discovery.”

Luke Bryan: “My Dad was a college graduate and he always supported me in that path of going to college. I certainly don’t feel like I would be where I am at today had I not been so lucky to have gone to college. It made me see life in another way. It made me work harder.”

CMT EMPOWERING EDUCATION is a comprehensive educational campaign that provides an online resource, CMTEMPOWERINGEDUCATION.COM, to aid CMT viewers in overcoming the most commonly perceived obstacles to furthering education.  The site aggregates the multitude of existing, quality information, in one easy-to-navigate, central location, and creates an individualized education action plan for each user.