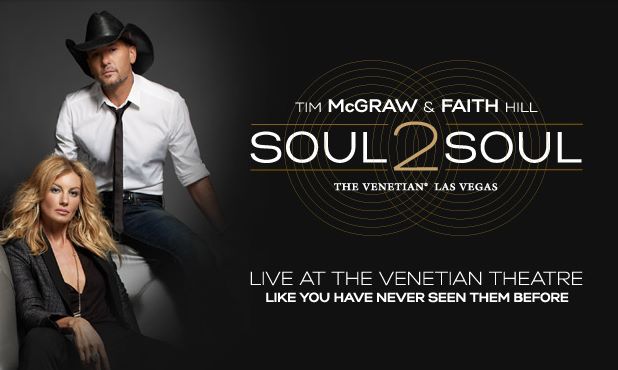 “Soul2Soul” at The Venetian will mark the first time in six years that McGraw and Hill have performed together in the United States. “Soul2Soul” will feature an all-new production with innovative lighting and set design technologies that were synonymous with the “Soul2Soul” concerts.  The Venetian Theater will also be modified to accommodate this new production.  These “Soul2Soul” concerts will include many of the no. 1 hits that have made them, both in their own right, two of the most significant entertainers of our generation.

“We are creating a show that will be completely different from what we’ve done before – and might ever do again,” said Tim McGraw and Faith Hill. “In arenas and stadiums, you’re always faced with the challenge of finding ways to make people feel closer to the action, no matter where they might be sitting. Now everyone will be close, so it opens up all kinds of creative possibilities and we’re looking forward to exploring those so that we can really give our fans something truly special.”

“It’s not every day that Las Vegas welcomes such stellar star power to the Strip,” said John Caparella, president and chief operating officer of The Venetian, The Palazzo & Sands Expo. “Tim McGraw and Faith Hill are country music’s first couple and we are proud to have such extraordinary talent. When they hit our stage in December it will surely be the hottest ticket in town.”

McGraw and Hill have been dominating the music charts since the early ‘90s and began performing together in 2000 in their record-breaking “Soul2Soul” tour, becoming that year’s top grossing and most successful U.S. tour. Their success continued in 2006 when “Soul2Soul II” returned to the road. It became the highest grossing country music tour of all time, the most attended of the year in any musical genre and remains the highest grossing multi-year North American tour in country music history.

Hill’s nineteen-year career has been highlighted by the sale of more than 30 million records worldwide, during which time she has celebrated thirteen no. 1 singles and twenty no. 1 videos. She was the first female artist to have three studio albums – 1999’s “Breathe,” 2002’s “Cry” and 2005’s “Fireflies” – all debut consecutively at no. 1 on Billboard’s Top Pop Album Chart and Country Chart.  Hill is a five-time Grammy Award winner, who has also won three Country Music Association Awards, 12 Academy of Country Music Awards, four American Music Awards, and four People’s Choice Awards.  For the fifth consecutive year, Hill is once again the voice of NBC’s Sunday Night Football’s weekly show open.

Ticket prices are $95.50, $175.50 and $255.50 and $295.50 inclusive of tax.  A limited number of VIP Packages – including preferred seating in the first two rows, a complimentary pre-fixe dinner at a select resort restaurant, two complimentary drinks at the show, a merchandise credit and more – will be available for $1,000, inclusive of tax. Performance dates and times are subject to change. Tickets are available for purchase at any Venetian | Palazzo Box Office, online at venetian.com or by phone at 702-414-9000.

For more information on Grazie and to become a member, please call Grazie Services at 702-414-1500 or visit www.venetian.com/Grazie-Loyalty-Program.

For more information on Tim McGraw and Faith Hill go to www.timmcgraw.com or www.faithhill.com.