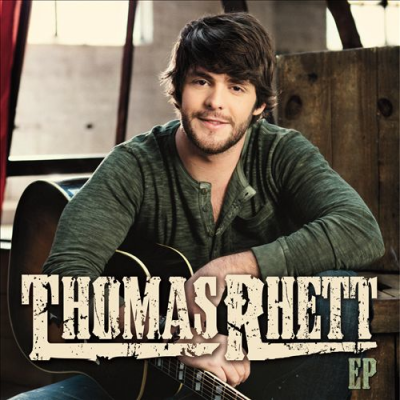 On the heels of a Top 15 debut single, “Something To Do With My Hands,” and wrapping up his first major tour with Toby Keith, hot newcomer Thomas Rhett released his self-titled EP on The Valory Music Co.  The five-song project is available now on iTunes and only hours after release, has already dominated the #1 spot on the iTunes Country Albums Chart.

Billboard’s Hot Shot Debut this week, “Beer With Jesus,” is a poignant tune that officially hits radio waves next week (9/4).  Penned by the singer/songwriter, the tune poses the hypothetical question, “if you could have a beer with Jesus … what would you say?” Famed producer Jay Joyce showcases the Valdosta, Georgia native’s insightful lyrics and myriad of musical influences from traditional Country to lively hip hop, giving fans a preview of Thomas Rhett’s full-length debut album, slated for release early next year.

“It feels great to have more music out there for my fans,” said Thomas Rhett. “We started touring in June with Toby Keith and Brantley Gilbert and I couldn’t be more excited for the EP to officially be out.”

But Thomas Rhett isn’t the only one excited about the new music. Jeff Kapugi from WUSN in Chicago says (of “Beer With Jesus”), “from the first note it made the hair on my arms stand up. This is a POWERFUL song that is amazingly written – one that we will be playing at Country radio for years and years.”

Music has been a part of twenty-two-year-old Thomas Rhett’s life for as long as he can remember, growing up in a musical family watching his singer/songwriter father Rhett Akins. In high school, Thomas Rhett dabbled in songwriting, playing guitar and formed a band with some friends. In 2010, while still a student at Lipscomb University in Nashville, Thomas Rhett signed his first publishing deal with EMI. Shortly thereafter he landed his first cut on Jason Aldean’s platinum-selling album MY KINDA PARTY with “I Ain’t Ready To Quit.” Just a year later, he signed a record contract with The Valory Music Co.