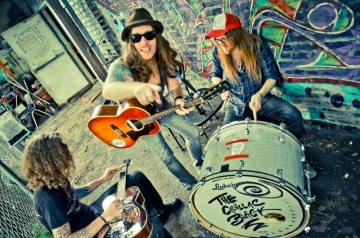 It is already proving to be one hot summer for new progressive country/rock trio The Cadillac Black and the heat will continue to rise as they open for Dierks Bentley on his Back To College Tour this August. The tour will visit the SEC campuses of The University of Georgia (8/20), The University of South Carolina (8/21), and The Grove at The University of Mississippi (8/22). This marks the second tour that Dierks has tapped The Cadillac Black to open and they have also landed coveted slots opening for Eric Church, Lynyrd Skynyrd and ZZ Top.

“I’m so excited to have had the chance to produce the EP. Dierks and his band have such a great vibe and play so well together,” shares Jaren. “Dierks asked me if we could get some of that ‘dirt’ we put on our music and I said, ‘well, hell yeah!’ I’m super stoked on how it turned out and I think country music fans are in for a treat. Y’all get ready for a party!”

The Cadillac Black have emerged with a sound all of their own, a sound that hovers between radio-ready country anthems, hard-and-heavy rock and traditional Southern folk. You could call it country fuzz, you could call it hipster-billy, you could call it any number of over-hyphenated, adjective-strewn things but when you boil it all down there’s only one way to describe it: damn good music, as pure and refreshing as a country creek.

While The Cadillac Black might be a brand new band, native Nashvillians Jaren Johnston (guitar), Neil Mason (drums) and Kelby Ray (lap steel) have been friends and musical co-conspirators for as long as anyone can remember. They’ve weathered their wild teenage years and even wilder tours, weathered major label letdowns and major league triumphs, conquered Music Row – Johnston co-wrote Keith Urban’s #1 single “You Gonna Fly,” earned a nomination for Music Row Magazine’s 2012 Breakthrough Songwriter Of The Year. Their music has been featured on the CW’s Vampire Diaries and Hart of Dixie, CBS’ CSI Miami, VH1’s Baseball Wives, and the 2011 trailer for FOX’s House.

Currently, The Cadillac Black are playing shows nationwide in support of their self-titled debut album, available now at all digital retailers.