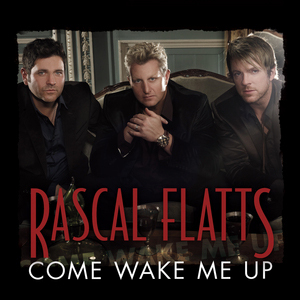 Country supergroup Rascal Flatts give fans a preview of their new music video for their current Top 20 single “Come Wake Me Up,” with a behind-the-scenes special, which launched today at CMT.com.  The full video will make its world premiere Friday, August 10 on CMT at 6 a.m. ET, and run at the top of every hour during music hours.

Filmed in Nashville, the video includes a cameo by Joe Don Rooney’s wife, Tiffany Fallon.  Adding to the intensity of the dramatic scenes, two-time female street freestyle world champion Dena Sodano steps in Fallon’s role as the motorcycle stunt driver.  “Come Wake Me Up” was directed by Shaun Silva, who explains the idea behind the video as the fate of two people from entirely different worlds.

“So I had this story unfolding, this moment of – here’s a girl who really is just from a different world than what he’s from,” said Silva.  “Joe Don’s character is doing all the things anybody would want to do for someone they love, but it threatens her identity until one night after an argument, she removes a necklace like breaking free from his lavish grasp.  Her decision to leave, and his to chase after her, only pushes her further towards her foreshadowed fate.”

Rascal Flatts will be featured on CMT all week long as some of their biggest hit videos return to the channel, and will be introduced by the band themselves.  The video premiere will be promoted across all of CMT’s digital platforms including CMT.com, CMT Mobile and nearly 3 million social media fans.