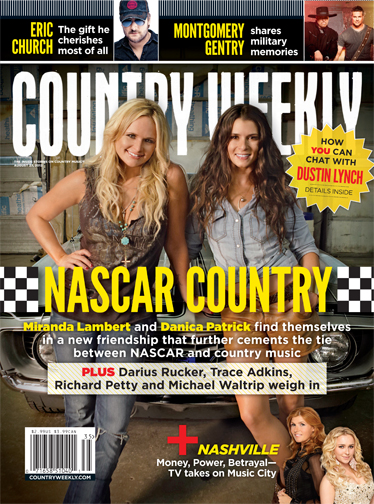 “Fastest Girl In Town” Miranda Lambert and her video co-star Danica Patrick take their distinctive styles of entertainment and sports to the cover of Country Weekly. Miranda and Danica met for the first time on the set of Miranda’s groundbreaking video which includes a multi-layered, digital campaign that can be experienced through an interactive version of the video which can be viewed HERE and her new mobile App which is out now.

Miranda sat down with the magazine and gave them an exclusive inside look into the video and her newfound friendship with NASCAR’s preeminent female driver. Along with some of the biggest names in racing, Miranda also gives her insight into the relationship between country music and NASCAR fans.

“Fastest Girl In Town” is top 20 and climbing and is the third single from Miranda’s critically acclaimed album, Four The Record. The reigning CMA and ACM Female Vocalist of the Year is lighting up audiences across the country with her ‘On Fire’ Tour.