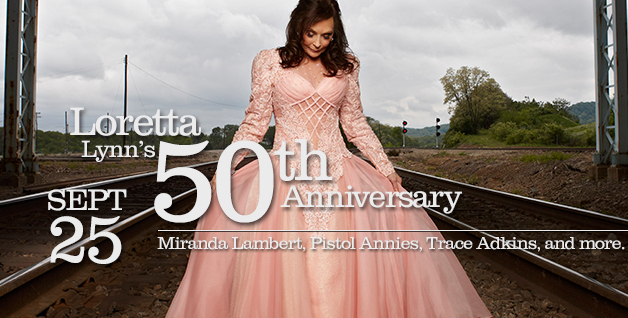 The Grand Ole Opry® presented by Humana® will honor one its most beloved members, Loretta Lynn, with a Sept. 25 show celebrating her 50th Opry Anniversary. Among the artists scheduled to participate in the celebration are Lynn, her sister Crystal Gayle, plus friends Miranda Lambert, Lee Ann Womack, Trace Adkins, and Pistol Annies, who will be making their Opry debut.

Lynn joined the Opry family on Sept. 25, 1962. Among the hundreds of accolades she has received in the years since are three Grammy® Awards, eight Country Music Association Awards including the first female artist to win the coveted Entertainer of the Year (1972),  induction into the Country Music and Songwriters Halls of Fame, and the Grammy® Lifetime Achievement Award (2010).

“There is no one at the Opry, in country music, or on Earth quite like Loretta Lynn,” said Pete Fisher, Grand Ole Opry vice president and general manager. “Her influence as a recording artist and songwriter reaches across musical genres, cultures, and generations. She’s earned her place among America’s musical icons, and we look forward to celebrating 50 years of Opry membership with her next month.”

Lynn’s rag-to-riches life story received the world’s attention when her autobiographical hit Coal Miner’s Daughter became a movie in 1980.  The film traced Lynn’s life from her teenage marriage, early career, and the role the Grand Ole Opry played in exposing the young singer to a national audience. Sissy Spacek won an Academy Award for her role as Lynn in the motion picture.

Lynn credits Ernest Tubb and the Wilburn Brothers for her first appearance on the Opry stage at the historic Ryman Auditorium. She sang her debut single “I’m A Honky Tonk Girl” that night, but says all she can remember about that first performance is tapping her foot. As she exited the building, her husband “Doolittle” was said to have remembered her exclaiming, “I’ve sung on the Grand Ole Opry! I’ve sung on the Grand Ole Opry!”

Tickets for the star-studded event are on sale now by clicking HERE.