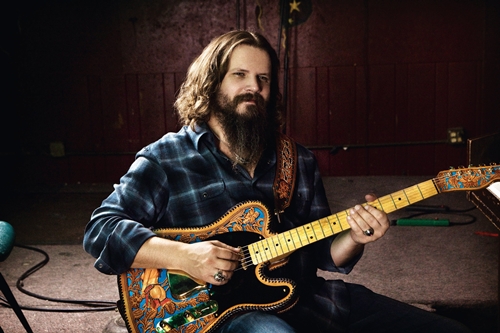 Award-winning singer/songwriter Jamey Johnson is joined by some of the greatest names in country music on his new album, Livin’ For a Song: A Tribute to Hank Cochran, that is set for an Oct. 16 release.

In an homage befitting an American master who had songs on the country charts for nearly half a century, the Buddy Cannon-produced album will be available first on vinyl beginning Sept. 25.

Cochran, who died at age 74 in 2010, is considered one of the greatest songwriters in the history of country music. He helped create the template for writing the perfect country song and had an uncanny knack for capturing the gut-wrenching depths of heartache so powerfully, yet so simply.

“If I had to dream up somebody like Hank to influence songwriters, I couldn’t have done a better job,” Johnson says. “That’s what he was–not just for me, but for Willie and for a lot of people–just a helpful friend. If he knew you needed help with something, he could help you. He was there. And that’s what I want to be for the people in my life, same as Hank. He influenced me, not only as an artist and songwriter, but also as a person.”

A mentor to artists such as Willie Nelson and Merle Haggard, Cochran’s catalog includes such standards as “I Fall to Pieces,” “She’s Got You,” “Make the World Go Away,” “The Chair,’ “Set ‘Em Up Joe” and “Ocean Front Property.” His songs have been recorded by artists including Eddy Arnold, Patsy Cline, George Jones, George Strait, Elvis Presley, Elvis Costello, Ray Price, Ronnie Milsap, Jim Reeves and many others.

On Livin’ For a Song: A Tribute to Hank Cochran, Johnson and Nelson sing “Don’t You Ever Get Tired of Hurting Me,” and the duo is joined by Leon Russell and Vince Gill on “Everything But You.” “Well, really, when you start talking about songwriters, you’ve got to say his name first,” says Nelson. “Then you start talking about everybody else. I think everybody would agree that Hank was the best writer up there.”

Johnson, Nelson, Haggard and Kris Kristofferson sing “Living for a Song,” a poignant recording that includes Cochran’s voice. “Hank’s ability to perform comes across right there,” Haggard says of the song he describes as “our life on paper, music.” He says, “I mean, he’s in there with some of the best singers in the world and he gets it across better.”

Johnson teams with Haggard on the Patsy Cline 1961 hit “I Fall to Pieces.” Says Haggard, “It’s important historically for people to know who Hank Cochran was and what he did. He always wanted to be the Hemingway of country music and I think he did it.”

There has been great anticipation about the musical direction Johnson would take after releasing his critically acclaimed 25-song double album, The Guitar Song, which was among the most lauded albums of 2010, receiving country album of the year nominations from the Grammys and the Academy of Country Music. It was certified gold and ranked No. 5 on both Rolling Stone’s and Spin’s albums of the year lists. This was the follow-up to the 2008 album That Lonesome Song, which was certified platinum and universally hailed by critics as a masterpiece.

He has emerged as one of the most important country artists of the last decade, both as a recording artist and songwriter. In 2007, he won Song of the Year from the Country Music Association and the Academy of Country Music for co-writing the George Strait hit “Give It Away.” He won Song of the Year from both organizations two years later for “In Color,” and also received five Grammy nominations during 2009-10.

When it came time to take the next step in his recording career, he listened to his heart and decided to embark on a labor of love. In a daring career move that is consistent with Johnson’s penchant for bucking conventional industry wisdom to create a unique path, he decided to devote his time and creative efforts to honoring his late friend and celebrate traditional country music.

“Shortly after he first met Jamey, Hank was diagnosed with pancreatic cancer,” says his widow, Suzi Cochran. “So for the two years he lived after that, Jamey would get off the road and pull his bus right up to the hospital, run up and see Hank and raise Hank’s spirits.  The last time Jamey saw Hank was the night before Hank died.” Johnson joined Buddy Cannon and Billy Ray Cyrus at Cochran’s bedside as they handed the guitar back and forth while singing Cochran’s songs. Cochran died about six hours later.

It was Cochran’s passing that inspired the idea for the tribute album. “We all met at the house one day and sang some songs,” Johnson says. “Bobby Bare was introducing me to a bunch of songs that when I thought I heard it all, I hadn’t heard anything yet. All the best stuff was the stuff I didn’t know about yet.

“An entire list of songs was created, not because I knew these songs existed and wanted to cut them, but because the other person did. Everybody got to pick their own, and so for me, it was just as much of a journey as it was for the band or anybody else involved.”

The relationship between Johnson and Cochran was one of mutual admiration. Cochran loved Johnson’s music, his deep appreciation of traditional country music and their conversations about songwriting. Cochran was a storyteller’s storyteller, so his visits with Johnson gave him a fresh audience with someone eager to hear the stories of the good old days with Nelson, Haggard, Harlan Howard and other country music legends.

“This is incredible,” she says of the tribute album. “I wish Hank had been here to see it. He wouldn’t believe it. He would have cried.  He’d be happy. It’s exactly like Hank would have done it.”