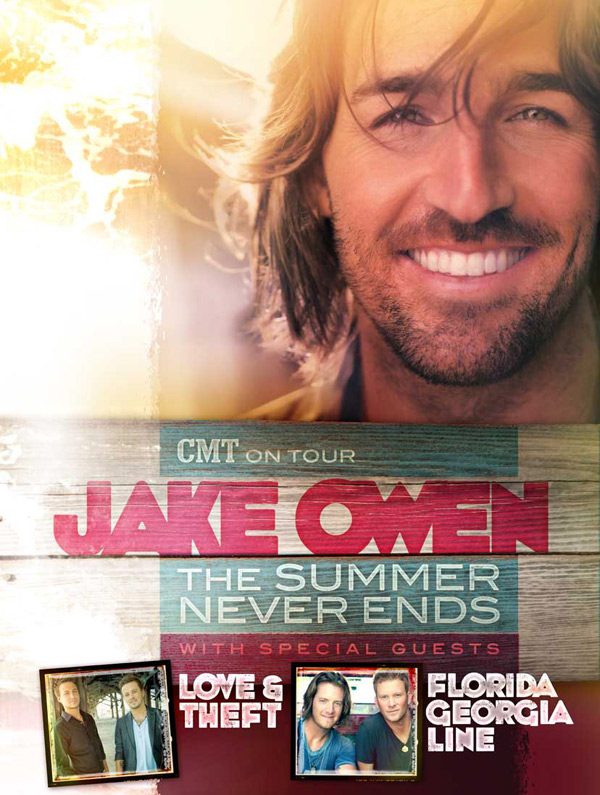 Rising superstar Jake Owen revealed to fans in Detroit over the weekend that he will return to Motor City as the next headliner of the 11th annual CMT ON TOUR, with special guests Love and Theft and Florida Georgia Line. CMT ON TOUR JAKE OWEN: THE SUMMER NEVER ENDS 2012 kicks off October 10 in New York City, with tickets going on sale Friday, August 24. For ticket information, visit cmtontour.cmt.com.

The tour comes on the heels of a monster year for Owen, which includes two back-to-back, multi-week #1 singles with “Barefoot Blue Jean Night” and “Alone With You.” Owen has performed to millions of fans since his career launched, including a coveted spot on the Brothers of the Sun tour this summer with superstars Kenny Chesney and Tim McGraw. Owen first appeared on the CMT ON TOUR bill in 2007 as special guest for Sugarland.

“Being the headliner of a tour is something I’ve been dreaming about since I was in college, performing songs every Sunday afternoon on a bar stool and playing for tips,” says Owen. “Headlining the CMT Tour is really cool for me because I was the opening, opening act in 2007, when Sugarland was the headliner and Little Big Town had the middle slot. So now, to be headlining the 11th Annual CMT Tour, with my buddies Love and Theft and Florida Georgia line, it feels very surreal. I’m honored and I can’t wait to hit the road in October and keep that feeling of summer going on THE SUMMER NEVER ENDS tour.”

“The CMT Tour has this incredible history of featuring artists that have gone on to become superstars, capable of filling stadiums and arenas, and now it’s Jake’s turn at headliner status,” said Leslie Fram, SVP of Music Strategy, CMT. “Jake possesses an undeniable star quality that promises to propel him to new heights amongst his peers who have anchored the CMT Tour. We’re also thrilled to feature up-and-coming acts Love and Theft and Florida Georgia Line in this year’s fantastic line-up.”

CMT ON TOUR launched in 2002 and has featured superstars Trace Adkins, Jason Aldean, Luke Bryan, Randy Houser, Jamey Johnson, Miranda Lambert, Brad Paisley, Rascal Flatts, Sugarland and Keith Urban. USA Today has referenced the CMT ON TOUR as the “proving ground for young country acts on the cusp of headliner status.” The tour is produced by Lindsay Bertelli of REACH. Tour dates are as follows: