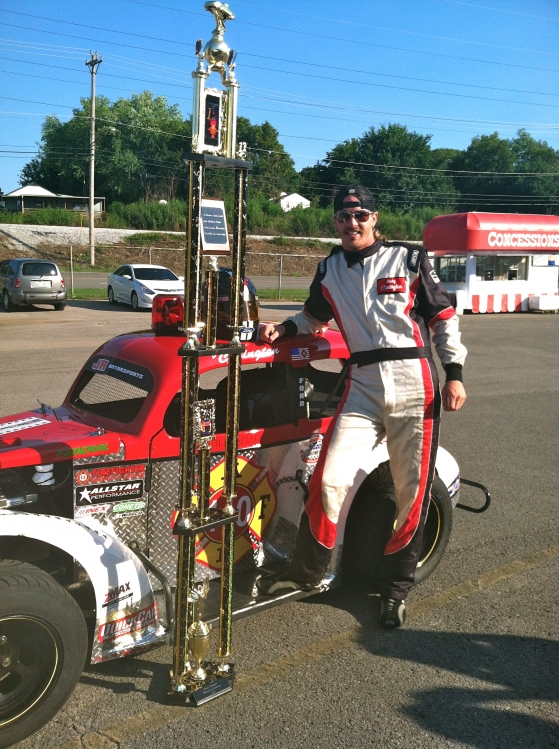 Country Music Star Bucky Covington was ecstatic on Saturday August 11th when he got the chance to drive a Legends Race Car and play a full band show for fans at the Fairgrounds Speedway in Nashville, all in support of Help The Good Guys. Although Covington only got a few practice laps the week before the race, he had a strong finish in the middle of the pack with no damage to the car. The track presented Bucky with a 7-foot tall trophy to recognize his work on behalf of Help The Good Guys, an organization that supports fire fighters injured in the line of duty. Also, attendance at the Fairgrounds Speedway was boosted because of the Covington’s involvement in the weekend’s festivities, reaching a final count of over 10,000 spectators.

“I’m always glad to do what I can to support injured fire fighters through Help The Good Guys,” says Covington,  “and getting to experience driving a race car for the 1st time made it that much more memorable. I am so thankful to the Fairgrounds Speedway in Nashville and to the Young Racing family for giving us such a meaningful opportunity.” Proceeds from the race and concert go to Help The Good Guys, an organization providing immediate financial relief to fire fighters and their families who have been injured on duty.

Saturday was a very busy day for Bucky kicking off in Dickson, TN at 9am to participate in Country Superstar Craig Morgan’s 6th Annual Charity Motocross Ride, and then off to the Fairgrounds Speedway in Nashville to qualify for the Legends Race at 2:30. Covington then signed autographs for fans before putting on a full band show and then jumping behind the wheel of his fire-engine themed racecar complete with working siren. Bucky would have loved to stay for the rest of the races, but had another show later that night also in Nashville.

Wrapping up a fun-filled weekend, Covington is ready to get back on the road to finish up the busy summer touring season. Bucky’s tour schedule is not the only reason he will be busy in the coming months. His new single “Drinking Side of Country,” the duet with Shooter Jennings, is generating quite a buzz with over 2 million views for the video in less than a week. The song can be found on his sophomore album GOOD GUYS, releasing September 11th with a portion of first week sales benefitting Help The Good Guys and the IAFF Charitable Foundation.