Brad Paisley and Carrie Underwood are hosting the Country Music Association Awards for a fifth time.

Underwood started the online buzz about their return with a tweet Wednesday, saying she was hanging out with Paisley. She joked that she caught him in her makeup chair and added the hash tag #suchadiva.

CMA confirmed the news on Twitter and Facebook shortly after with a picture of the two stars during a photo shoot. 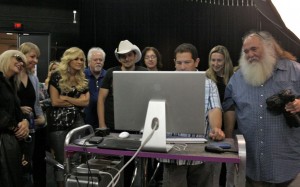 The CMA Awards will air live Thursday, Nov. 1, on ABC from Nashville.