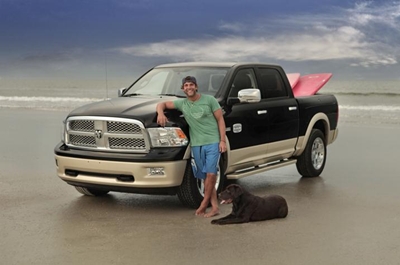 Platinum-selling country star Billy Currington will join previously announced artists Kellie Pickler, Brantley Gilbert, Easton Corbin, and Zac Brown Band for the “Road to the Ram® Jam” series and sweepstakes.  The Road to the Ram Jam, presented by the Ram Truck brand, features five of today’s best country music artists and provides fans the opportunity to win prizes including trips for two to an invitation-only 2012 Ram Jam concert event December 29th in Nashville, TN where all five artists will perform.

The Road to the Ram Jam series and sweepstakes helps bring country music fans closer to some of their favorite artists with exclusive video content, the opportunity to win prizes including collectible posters and vinyl records through participating country radio stations nationwide, and free music downloads. Fans can enter the sweepstakes for a chance to win trips for two to the invitation-only 2012 Ram Jam concert event at RamTrucks.com/RoadtoRamJam or on the Ram Trucks Facebook page at ramjamsweeps.com.

Billy Currington will offer fans a chance to win a free download of his single “Swimmin’ in Sunshine” when they enter the Road to the Ram Jam concert sweepstakes. All five Road to the Ram Jam participating artists have received a lease on a 2012 Ram 1500 Laramie Longhorn truck. The trucks will be auctioned off in early 2013 with all proceeds going to benefit a charity of each artist’s choice. Proceeds from Billy Currington’s truck will be donated to Team Rubicon. Team Rubicon unites the skills and experiences of military veterans with medical professionals to rapidly deploy emergency response teams into crisis situations. For more information on Team Rubicon fans can go to http://teamrubiconusa.org/.

“It’s an honor to be included along with such great artists as Brantley, Kellie, Easton and Zac Brown Band. I look forward to performing with them this December in Nashville,” said Billy Currington. “Also, thank you Ram for giving me another opportunity to work with Team Rubicon. They will be the real winners in this sweepstakes.”

“We welcome Billy Currington into the select family of ‘Road to Ram Jam’ artists and are thrilled to have him drive a new Ram 1500 Laramie Longhorn pickup truck,” said Fred Diaz, President and CEO of Ram Truck Brand and Chrysler de Mexico, Chrysler Group LLC.. “His impressive career and string of hit singles clearly demonstrate to us that he shares the same authenticity, dedication and hard-work values as the Ram Truck brand and we look forward to seeing him join Kellie Pickler, Easton Corbin, Brantley Gilbert and the Zac Brown Band later this year on the Ram Jam stage of guts and glory.”

Since Billy’s debut in 2003, he has sold over 11 million units, earned multiple RIAA Gold and Platinum certifications, had seven #1 hit singles, ten Top 10 singles, been nominated for two Grammy Awards and multiple CMA and ACM Awards. Fans can go to www.billycurrington.com to get more official news and information on Billy.