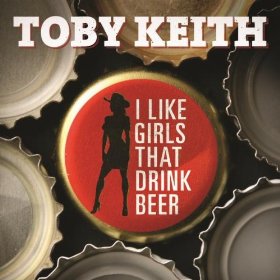 His latest smash song is still ringing in radio listeners’ ears and his previous hit, “Red Solo Cup,” just certified double platinum. But if there’s one constant in the career of Toby Keith, it’s the inexorable progression of new music. “I Like Girls That Drink Beer,” the first single from Toby’s next album, arrives at radio and all digital download sites July 24.

“We were in the studio and everybody who heard it was like, ‘You’ve got to release that,’” Keith said.

Written by Keith with longtime collaborator Bobby Pinson, “I Like Girls That Drink Beer” marries a dyed-in-the-wool country sound with an equally on-point sentiment: “Bye bye, baby I’m leavin’/You can keep your mansion and your money/Your boat and your Benz and your uptown friends/And your country club that ain’t really country.” Keith promises he’ll find what he wants in a honkytonk. Because, of course, he likes girls that drink beer.

As he did on his critically acclaimed 2011 No. 1 album Clancy’s Tavern, Keith produced the new single and continues work on the rest of the music that will comprise his next release. A specially mastered version of the song will be available on iTunes.

In other Toby Keith news, his viral sensation “Red Solo Cup,” the second single from Clancy’s Tavern, has just been certified double platinum by the RIAA. Toby remains on his standing room only Live In Overdrive Tour, Presented by Ford F-Series. And associated endeavors including his I Love This Bar And Grill restaurants and Wild Shot Mezcal continue to experience rapid growth in their markets.