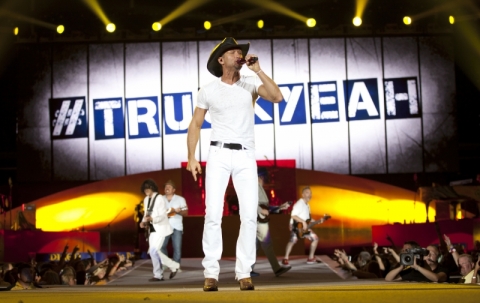 Country Superstar Tim McGraw‘s first single for Big Machine Records, “Truck Yeah,” debuted at No. 22 on the Billboard Hot Country Songs Chart and No. 25 on the Mediabase/Country Aircheck Chart, marking his highest solo chart debut ever. His previous record was in 2002 when “Grown Men Don’t Cry” debuted at No. 30.  “Truck Yeah” also set the pace this week as the No. 1 most added song with 99 stations on board.

“Country radio has given me an amazing career already,” said McGraw.  “I’m 20 years into it, so to be having my highest chart debut ever is such a cool thing.   I can’t thank everyone in radio enough for the support they’ve shown me over the years and especially now as I’m starting a new chapter with a new label.   It means more to me than ever…the best is really yet to come!”

McGraw continues to excite crowds on the BROTHERS OF THE SUN TOUR, performing for hundreds of thousands of fans in stadiums across the nation.  On Sunday, the tour hit Target Field in Minneapolis with the Minneapolis Star Tribune commenting that “Without question, award McGraw, the son of the late World Series champion relief pitcher Tug McGraw, a save for Sunday’s Brother of the Sun show.  In fact, give him the MVP award for the whole day…he was perfect for the party-loving crowd…he clearly knows his ways around stadiums.”

The tour continues on this weekend with stops at Anaheim’s Angels Stadium (7/14) and Oakland’s O.co Coliseum (7/15).   For a full list of tour dates and music updates, visit www.timmcgraw.com.