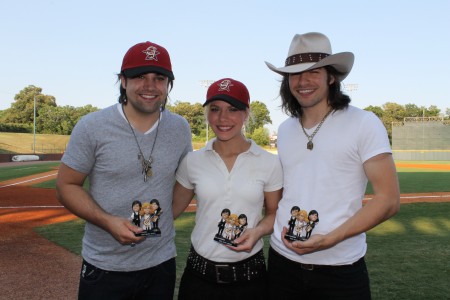 Republic Nashville’s The Band Perry, partnered with their hometown baseball team – Greeneville Astros – on Thursday evening (6/28) to thank those who made donations to the United Way. The sibling trio is always the first to step up to the plate to support their beloved hometown of Greeneville, TN, and were honored to perform a special acoustic concert for the 200 VIP guests. The private event took place just before the Greeneville Astros baseball game.

“We love small towns and we especially love OUR small town.  Performing for our friends and neighbors and raising money for United Way at the same time meant a lot to us,” says Kimberly Perry.

The team celebrated The Band Perry’s appearance and showed additional support for the non-profit by creating custom bobbleheads for the game. That night, all patrons received the collectables and $1 of every ticket sold benefited United Way.

After their performance, Kimberly, Reid and Neil threw the first pitch of the game and had the opportunity to visit with The Astros’ General Manager David Lane and Owner Scott Niswonger.

“It was an honor to spend time with Mr. Niswonger and Mr. Lane and be a part of such a special evening in the community,” says Reid Perry.

“We were excited about throwing out the first pitch at the game! We love sports and even though we are baseball rookies we had a blast on the field with the professionals,” says Neil Perry.

Following the game, TBP headed back to the bus for more shows as special guests on Brad Paisley’s tour. Currently they are also nominated for a TEEN CHOICE award for Choice Country Group and fans can cast their vote right now at teenchoiceawards.com.