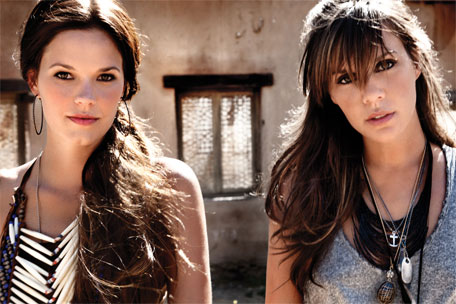 A&M/Octone Records’ vibrant new country music duo Miss Willie Brown, comprised of singer/songwriters Kasey Buckley and Amanda Watkins, released the video for their debut single, “You’re All That Matters To Me” on CMT.  The upbeat track goes to radio on July 9 and was written by Robert John “Mutt” Lange and produced by Nathan Chapman (Taylor Swift, The Band Perry).  The video, directed by T.K. McKamy, showcases the duo’s playful individual personalities and uses comedy to tell the story of two girls fighting for one guy’s attention.

“We had a specific vision for the video as far as fighting over a man and showcasing our humor and friendship. When the director,TK, came back with this hilarious treatment, we knew we wanted to work with him, “ said Buckley.  “It was such a rad shoot…a lot of laughing and playing tricks on each other, which is pretty much how every day on the road is for us.”

“We’ve been writing songs and performing together for a few years,” added Watkins.  “And now having a video feels like such a culmination of all of our hard work, it’s a tangible and visual result of what we’ve been working so hard for!”

Buzz for Miss Willie Brown has been building over the past year as they toured across the country with Dierks Bentley, performed at CMA Fest, Bonnaroo and recently launched their first radio tour.