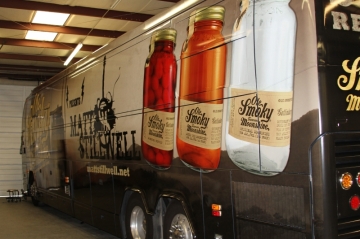 Average Joes Entertainment’s Matt Stillwell has partnered with Ole Smoky Moonshine, East Tennessee’s first federally licensed distillery.  The partnership includes a custom bus wrap of the traditional moonshine mason jar and will head out on tour with Stillwell starting July 26 with stops all along the west coast.

Ole Smoky’s own Michael Simonis, felt the company motto of honoring tradition and hard work was a great fit with Stillwell and his music, not to mention Stillwell’s love of “shine.”  Simonis explains, “After Matt and the Ole Smoky Team were sippin’ moonshine one night, the partnership felt perfect to grow together.”

Distributed in 37 states, with plans to be in all 50 by the end of the year, Ole Smoky Moonshine is proud to finally be able to legally share the best spirits in the mountains. Their recipes and traditions have been passed down through generations of families in the Virginias, Carolinas, Kentucky, Georgia, and Tennessee.

After his bus was destroyed in March 2012 from the violent Kentucky tornados, Stillwell is excited to share his new and improved bus to his fans. Watch below the behind the scenes footage of his bus being transformed into a mobile mason jar. The new bus was completed just in time to hit the road, as Stillwell is on tour with dates all throughout the west coast.  Stops along the way include Amarillo, TX, Phoenix, AZ, Salt Lake City, UT and Denver, CO.  For a complete list of tour dates visit Stillwell’s website at www.mattstillwell.net.