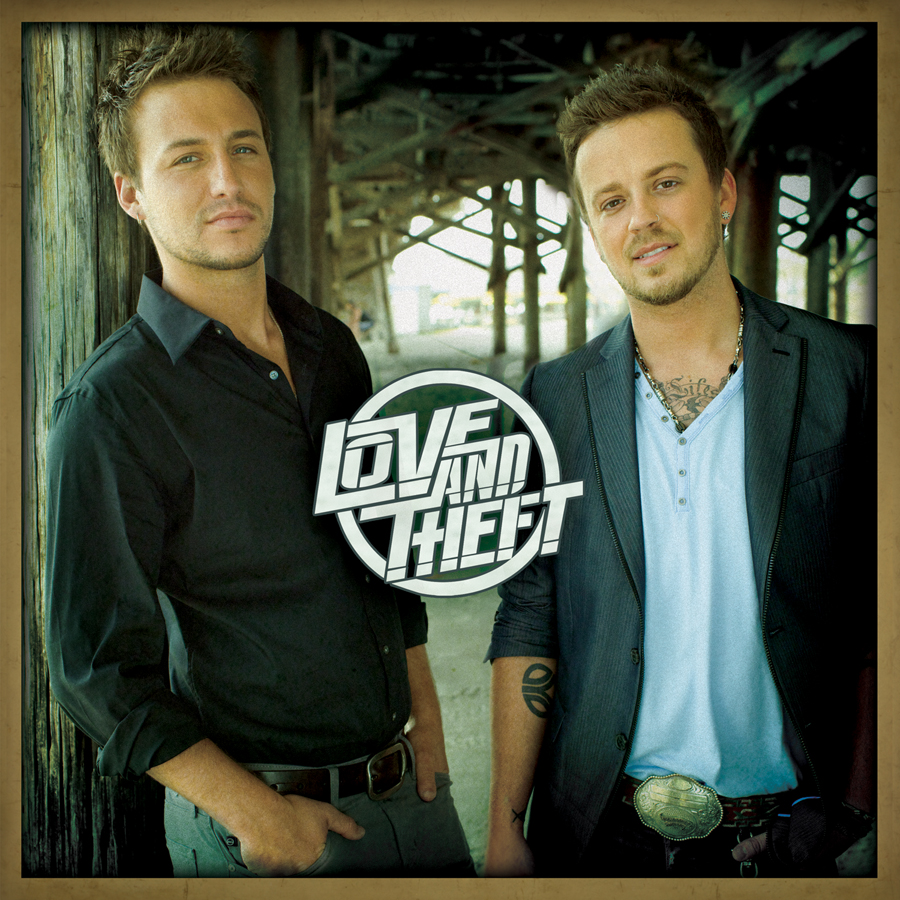 Tuesday, July 24, is a big, big day for Love and Theft‘s Stephen Barker Liles and Eric Gunderson with the release of their RCA debut album, appropriately titled Love and Theft! Featuring their smash single, “Angel Eyes,” the new album spans 11 tracks, five of which had one or both of Love and Theft as co-writers. For this album, Eric and Stephen teamed-up with longtime Nashville producer Josh Leo — himself an amazing guitarist — who’s also produced Alabama and Nitty Gritty Dirt Band, among others. Working with Josh, Eric and Stephen were able to make a contemporary album in an old-school way, getting all the players into the studio together to create the kind of sound that was exactly where they wanted to go.

Stephen Barker Liles was thrilled with the way they got to make their new album. “This album felt like makin’ an album. You know? It really did. The way that we always thought we wanted to make an album, the way we thought albums were made. First album was a little more pieced together and a lot more too many extra tracks on there, too many extra things, so this one’s a lot more organic. It was based around our vocals, which is what we really wanted, and we got to sing the way we wanted to sing. We got to put our input in it. Josh Leo is incredible. He’s an icon, and to work with him…and he played guitar on it also. It was amazing. I mean, I really enjoyed it. It was definitely my favorite experience as far as makin’ music, so far.”

Of the recording process behind the duo’s new album Eric Gunderson says, “The art and the whole experience of a big studio with a live band with a big control room, a big live room — it’s kind of gone by the wayside because it’s so much cheaper and easier to make a recording in a small home studio or in an office or somethin’, so to get to kinda continue in, like, the more old-school way was a lot of fun. I mean, it was just an honor to get to work with Josh, work with good engineers, work with, you know, the best live players in town and see them all interact and play off of each other. I think you get musical moments and musical performances that you wouldn’t get otherwise, so to be able to do it live was really cool, and it was exciting for us to, I guess, maintain some of that old-school integrity.”

For their new album, the guys tried different approaches to sequencing the songs, including who was singing lead from one song to the next, but Eric says they ultimately focused on creating a specific kind of listening experience. “We wanted it to feel like it was you’re at a concert and kinda looked at it that way and we wanted it mainly to flow. I mean, a lot of times, albums feel very disjointed and kinda just thrown at the wall and if it sticks or one song drips in front of another, you know, that’s how it ends up, but this was very thought-out and very strategic, and we have to give a lot of credit to Josh Leo, who’s really good at that, and he’s done it for years.”

Stephen and Eric couldn’t be happier to see how fans have been embracing their latest single, “Angel Eyes,” and Eric says that the reaction continues to be amazing. “Fan reaction’s been fantastic. People were singin’ the words to ‘Angel Eyes’ louder, right back to us word for word more so than they have in the past, obviously, and then more so than other songs, as well, so it’s pretty cool to see how it kinda sticks with people. And I guess that’s a really good sign, so it’s pretty cool.”

When they aren’t busy promoting their new album, the guys are currently on tour with Brad Paisley, playing the “Virtual Opry” stage on Brad’s Virtual Reality World Tour! For all the latest tour dates anytime, visit LoveAndTheft.com!

So are you a Hopeless Romantic or a Heartbreaker? Visit LoveAndTheft.com to choose sides and get the lowdown on how to win dinner with the guys or some other very cool prizes in the Team Love vs. Team Theft contest underway now!

Be sure to pick up Stephen & Eric’s new album, Love & Theft, tomorrow July 24 at your favorite retail store, or download on iTunes by clicking HERE.