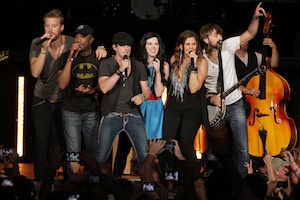 As the North American leg of Lady Antebellum’s headlining OWN THE NIGHT WORLD TOUR sponsored by GAC with special guests Darius Rucker and Thompson Square comes to a close, the 85 city run that has incited fan hysteria and massive critical acclaim also marks an attendance milestone with over one million fans as they continue into Europe and Australia this summer.

“I remember how exciting and special it was to hear we sold out the first weekend of the tour back in the Fall,” said Charles Kelley.  “I seriously had no idea that so many others would follow, especially places like LA and Chicago, or that we would be sitting here eight months later saying we played to a million fans.  It doesn’t even register.”

“What I love is the connection we made with all of those fans,” added Hillary Scott.  “It truly felt like we got to know everyone in the arena every night, which was one of our biggest goals when we started brainstorming on a paper plate last summer in Lake Tahoe.  We invited fans up on stage most nights and just tried to get as close as possible to them…it was one giant sing-along each night.   As a songwriter, it’s so cool to hear the lyrics you wrote with your best friends in the back of a bus echoing back to you by so many people.”

“We’ve definitely become closer as a band – musically and personally – over this tour too,” noted Dave Haywood. “We are really proud of our show and how much we’ve grown on stage.  Moments like selling out two nights in our hometown of Augusta, GA with all our friends and family around are really going to make us miss being on the road this Fall, but we’re looking forward to working on new music and getting back into the studio.”

A tour concept that started with a simple production sketch on a paper plate, the OWN THE NIGHT WORLD TOUR kicked off in Knoxville, TN on 11/11/11 with an entourage of more than 100 people in 10 buses and eight trucks who travelled more than 46,000 miles across the continent, hitting arenas and amphitheatres in 34 states and six Canadian provinces. Along the way, the trio has earned praise from critics for their spirited live show and proved that Lady Antebellum has long-term staying power as one of the biggest touring groups in country music.

“Nashville’s Lady Antebellum, on its first arena headlining tour, has become such a crowd-pleasing phenomenon that there is arguably no other country band on the planet right now that can steal the trio’s ever-brightening spotlight.” – Salt Lake Tribune

“Lady Antebellum certainly pushes all the right buttons in concert –backdrops dominated by shooting stars and bucolic scenery, a careful placement of the hits — but there’s more to their appeal than just that. Their

palette is broader, more forcefully colored than most of their peers, and the soulfulness that results is
unmistakable.” – Variety

“The Grammy-winning group has claimed its spot among the elite headliners, moving up from playing theaters to selling out massive arenas.” – San Jose Mercury News

“Its performance erased all doubts that the act’s seemingly meteoric ascendance to the top of the contemporary country world is undeserved…its celebrated vocal harmonies were terrific.”  – Kansas City Star

“While it can be hard to take the studio sound to the live stage, Lady Antebellum proved it can be done. But
more than that, the group’s playfulness, youthful exuberance and unending energy was evident fromstart
to finish.” – Virginian Pilot

Upcoming stops on the OWN THE NIGHT 2012 WORLD TOUR include shows in the UK where they will also open for Bruce Springsteen in Hyde Park, and headline in Ireland, Switzerland, Germany, Denmark, Norway and Sweden before they head to Australia in September. For a full list of upcoming tour dates, visit www.ladyantebellum.com.