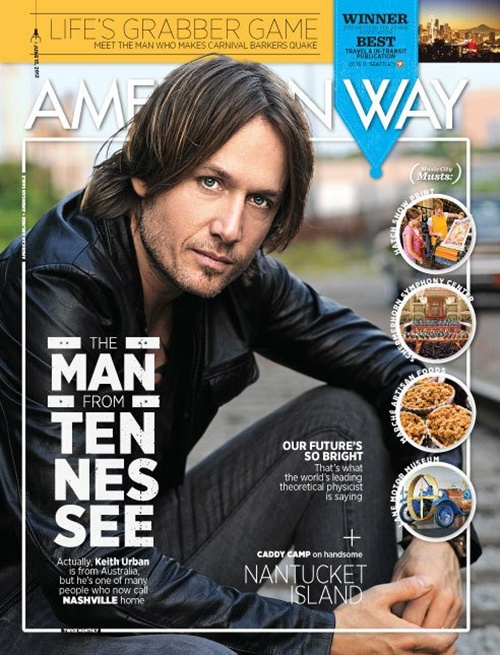 Grammy Award winner Keith Urban graces the cover of American Airlines’ American Way Magazine this month, to give travelers across the globe his perspective on ‘one of our country’s leading arts and entertainment cities’, his hometown of Nashville, Tennessee. A longtime supporter of countless Nashville-based charities, citywide initiatives and of some of Nashville’s best-loved institutions, Urban came to Nashville in 1992 to pursue his musical career.

He has played an integral role in the preservation of the Country Music Hall of Fame, and has consistently lent his support for citywide initiatives for the betterment of Nashville and its population.

Favorite Eats: “I loved going to the meat-and-three joints, for funky, earthy food,” says Urban. “A lot of those are still around like Brown’s Diner, Rotier’s Restaurant and Jacks Bar-B-Que. (So) if you want something that’s unique to Nashville, those are some of the places to go.’

Favorite Live Music Hotspots: “A lot of the places that I went early on to hear live music are still there!” says Urban. He points to places like 12th and Porter and the Exit/In, which have been Nashville staples for more than 25 years.

Why Nashville: ‘This is a real family-oriented place,” says Urban. “There’s a lot of focus on family, which suits us perfectly.”

To read more from the article, please click HERE.