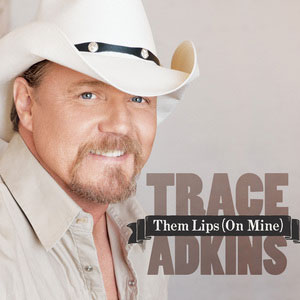 Trace Adkins’ flirtatious new single, “Them Lips (On Mine)” is now available via all online retailers and can be downloaded at www.ThemLips.com. This is the first song from Adkins’ forthcoming album, which will be released this Fall on Show Dog Universal – more info to be announced.

The up-tempo track is a fun summer groove featuring Trace’s signature sly-dog style. Written by Jim Beavers and Tom Shapiro, the not-so-subtle lyrics amount to the sexiest “shut up and kiss me” request in years. In fact, the new single has started an interactive frenzy with fans of all ages putting their lips on Trace…online, at least. A light-hearted online campaign has given fans the opportunity to insert their photos next to Trace’s for a “virtual kiss” HERE

Trace is currently on the road playing both big venue dates as well as select theaters as part of his intimate Songs & Stories Tour. As previously announced, he is also shooting a new GAC series, Great American Hero, which he hosts and will debut soon.