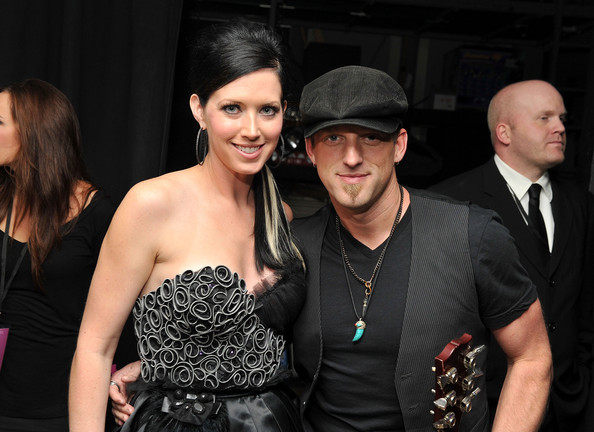 The fan-voted accolades continue to roll in for Stoney Creek Records duo Thompson Square.  This week, Thompson Square becomes the first Country act in history to land two music videos for the same song inside the GAC Top 20 Country Countdown.

Fans have voted both music videos for the hit single, “Glass,” up the Great American Country network’s video chart to land at #5 and at #17.

The reigning ACM Vocal Duo of the Year filmed two videos for the Top 20 and rising single, “Glass,” simply because the married duo couldn’t make the decision between a black and white or full-color visual interpretation of the song.

“We can never agree on anything,” Keifer Thompson said upon the release of the second music video. “Shawna wanted a color video and I wanted a black and white video. We figured, why argue about it?  We can do both.”

The initially released music video for “Glass,” was directed by Roman White (Carrie Underwood, Kelly Clarkson) in classic, black-and-white and currently sits at #5 on the GAC Top 20 Countdown.

Also this week, Thompson Square’s “Glass” saw a double-digit sales increase at iTunes for the 5th consecutive week, solidifying that the song has become the GRAMMY nominated act’s third bonafide smash single in a row.  In fact, “Glass,” sales will overtake the pair’s previous Top 10 hit, “I Got You” in a matter of weeks.   Just last week fans voted Thompson Square’s, “I Got You,” the winner of the “Duo Video of the Year” award at the 2012 CMT Music Awards.

Additionally, the former husband/ wife bartending team is featured in the current issue of People Country magazine.  Shawna and Keifer Thompson visited the rooftop Bookmarks Lounge at the Library Hotel on their last trip to New York, sharing their favorite summer cocktail recipes with the editors of People Country for a three-page “The Good Life” spread. Exclusive photos, interview and Thompson Square’s personal drink recipes can be found in the July 2012 issue of the magazine, on stands now.

The reigning ACM “Vocal Duo of the Year,” Thompson Square has earned an astounding list of accolades in its first year and a half on the Country music scene. The husband/wife duo’s #1 smash, “Are You Gonna Kiss Me Or Not,” earned them 2 GRAMMY Nominations as well as an American Music Award nom, 2 CMA noms, 5 CMT Music Award nominations, a Nationwide “Best New Live Act” nomination as well as a 2012 Teen Choice Award nomination for “Choice Country Group.”  Keifer and Shawna Thompson are also winners of 3 fan-voted American Country Awards as well as the 2012 CMT Music Award for “Duo Video of the Year.”

“AYGKMON” is nearing Double Platinum sales status, was the #1 Digital Soundscan Single for 5 weeks straight, the #1 Country Ringtone for 12 consecutive weeks and was iTunes’ 2011 Country Song of the Year.  Thompson Square’s whirlwind year has seen them on national tours supporting Jason Aldean and Lady Antebellum as well as gracing the stages of The Tonight Show w/ Jay Leno, Jimmy Kimmel Live!, Conan, Fox & Friends All American Concert Series and the 45th Annual CMA Awards. Thompson Square (or T2) ended 2011 as Billboard’s #1 New Country Artist in terms of digital sales and the #6 New Artist across all genres.

Thompson Square is currently on tour with Lady Antebellum’s “Own the Night World Tour,” which takes the duo to Canada this week with stops in Montreal, Ottawa and Toronto.