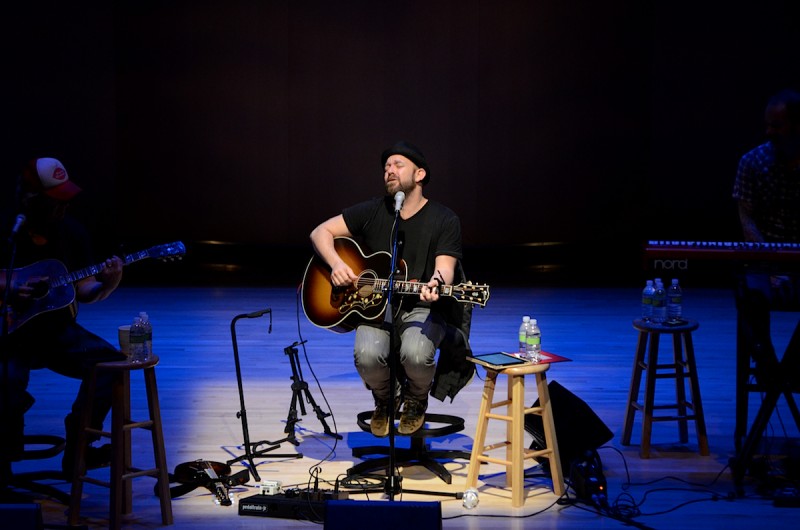 Sugarland’s Kristian Bush joined the CMA Songwriters Series for two shows this week, playing L.A.’s House of Blues and the Musical Instrument Museum in Phoenix, Arizona alongside country music songwriting superstars Bob DiPiero, Bobby Pinson, and the legendary Whisperin’ Bill Anderson. Both nights were intimate gatherings peppered with lots of laughter, as all four men cracked wise, delivered well-honed one-liners, and told the (often hilarious) stories behind their songs before performing them live.

The sheer volume of hit songs on the stage was humbling. Bill Anderson alone has spent nearly 50 years in the business, a career spanning from his first No. 1 for Ray Price in 1958 to such recent massive hits as Brad Paisley’s “Whiskey Lullaby” and George Strait’s “Give It Away.” He delivered acoustic versions of both favorites in his sage, intelligent voice, defusing the sadness of the lyrics with perfect comic timing in between tunes. (What’s the difference between a songwriter and a large pizza? The pizza can feed a family of four.) If you ever have a chance to sit at Anderson’s feet and listen, don’t pass it up. The man is an icon.

On the opposite side of the stage, host Bob DiPiero lent his gruff, matter-of-fact voice to the blockbusters he’s written: Montgomery Gentry’s “Gone,” which had the L.A. audience joyfully contributing the bang-bangs; Tim McGraw’s “Southern Voice,” where his use of “Apalachicola” led to a blossoming bromance with Kristian; and George Strait’s “Blue Clear Sky,” explaining to the audience that the backwards phrasing in the title (as opposed to “clear blue”) was inspired by Forrest Gump, and he was unwilling to change it… even when Strait asked him to. “The Church on Cumberland Road” led things off in L.A., and returned in Phoenix by request, the second performance featuring a long and very impressive piano solo from Brandon Bush, who sat in with the men on keyboards both nights.

Frequent Sugarland collaborator Bobby Pinson likes to describe himself as “Chris from Family Guy,” and he provided much of the evening’s comic relief, whether pausing for a water break at the end of his own “Don’t Ask Me How I Know,” or rewriting the words to three of the songs he co-wrote with Jennifer and Kristian – “All I Want To Do,” “Already Gone,” and “It Happens” – into what can only be called the “Poop Remix.” (Don’t ask for specifics. You kinda had to be there.) He also showcased several of the massive Toby Keith tracks he had a hand in, from “Made in America” to “Beers Ago.”

As Kristian tweeted after the first show, “Hits to the left of me, hits to the right…” He supported his fellow performers on mandolin throughout each night, and when it came to his turn in each round, Mr. Bush decided bring the crowd both backwards and forwards on his own personal songwriting timeline. On several occasions, he chose to demonstrate the way his old Billy Pilgrim material has influenced and shaped the songs he’s written with Sugarland over the years. In L.A., “I Won’t Tell” bled into “These Are the Days,” and in Phoenix, he performed the wonderful “Insomniac/Incredible Machine” mashup he debuted during his 2010 Thanksgiving show at Eddie’s Attic in Decatur.

He also tried out some new original material, like “You Can’t Stop The Sun From Going Down,” a song about life’s inevitabilities that he “co-wrote” with his 7 year old daughter Camille – all three other men on stage immediately tried to sign her to a publishing deal – and “I’ll Never Run Out of Ways,” written with his old friend Ellis Paul. In L.A., Kristian had the crowd and himself grooving to a new tune called “You’re Gonna Get Yours,” about the way karma comes back around. “That song made me want to dance!” he said, then joked, “I can’t dance.” To his left, Bill Anderson shot back, “No, but you sure can write songs.”

Of course, there were Sugarland songs in both sets: Kristian performed “Stand Up” in Phoenix (garnering a tiny standing ovation from the front row), and “Baby Girl” made back-to-back appearances. We learned that Kristian’s original suggestion for that song’s second line was Don’t know / Can’t see ‘em / Except for the ones in the wax museum, and everyone more or less agreed that it was a good thing Jennifer talked him out of that lyric; he also reshaped the way the song can be sung, performing it in a slow, sad singer-songwriter style. “It’s hard when you’re starting out as an artist to get your parents to believe you’re doing anything worthwhile,” he explained of the mood change, and in that light, the melancholy mood fit perfectly. At the end of the song in Phoenix, he paused for a moment and said, “Jennifer and I wrote this about the third month of knowing each other,” and then shook his head. “Anything is possible,” he concluded.

All in all, it was two extraordinarily special nights of music, with the raucous bar crowd at the House of Blues contrasting perfectly with the sophisticated theater patrons who attended in Phoenix. Both audiences were treated to a once-in-a lifetime chance to hear the songs they love sung by the people who created them, and hear them the way they likely emerged from each songwriter: just an acoustic guitar, an idea, and a voice. The CMA Songwriters Series continues across the country throughout the year; if it comes to your town, you’re gonna want to make the trip.