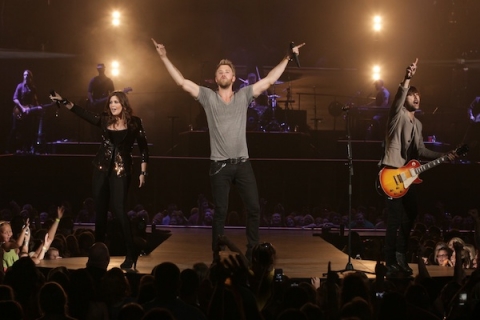 Friday afternoon, GRAMMY winning trio Lady Antebellum officially sold out their Australian OWN THE NIGHT 2012 WORLD TOUR dates in Melbourne, Brisbane and Sydney where they added and sold out a second night at the Opry House due to demand.  The group has now sold over 900,000 tickets to the global tour with upcoming dates scheduled in the US, Europe and Australia.

This weekend, Lady A continued to delight Canadians with the connection they are making back to the last row of fans in the massive venues.  Stops on the Eastern Canadian run included Montreal, Ottawa and Toronto.

“The group is now on its first headlining arena tour and you have to play to the back seats…those who were there certainly ate it up. The fans cheered, sang and swayed with their cell phones on.”   – The Montreal Gazette

“The Grammy-winning, Nashville-based Lady Antebellum took it even higher with a surprisingly terrific performance…they demonstrated an ability to connect with every fan in the crowd.”  – Ottawa Citizen

“And on their Own The Night world tour they didn’t seem to own the world. Instead they had to be satisfied with owning part of the 16,000 fans belting out each and every country crossover hit for 80 minutes.”  – Toronto Sun

Before heading overseas, the tour continues this week in the US with stops scheduled in Birmingham, AL (6/21), Atlanta, GA (6/22), Greenville, SC (6/23) and Indianapolis, IN (6/24). For a full list of tour dates, visit www.ladyantebellum.com.