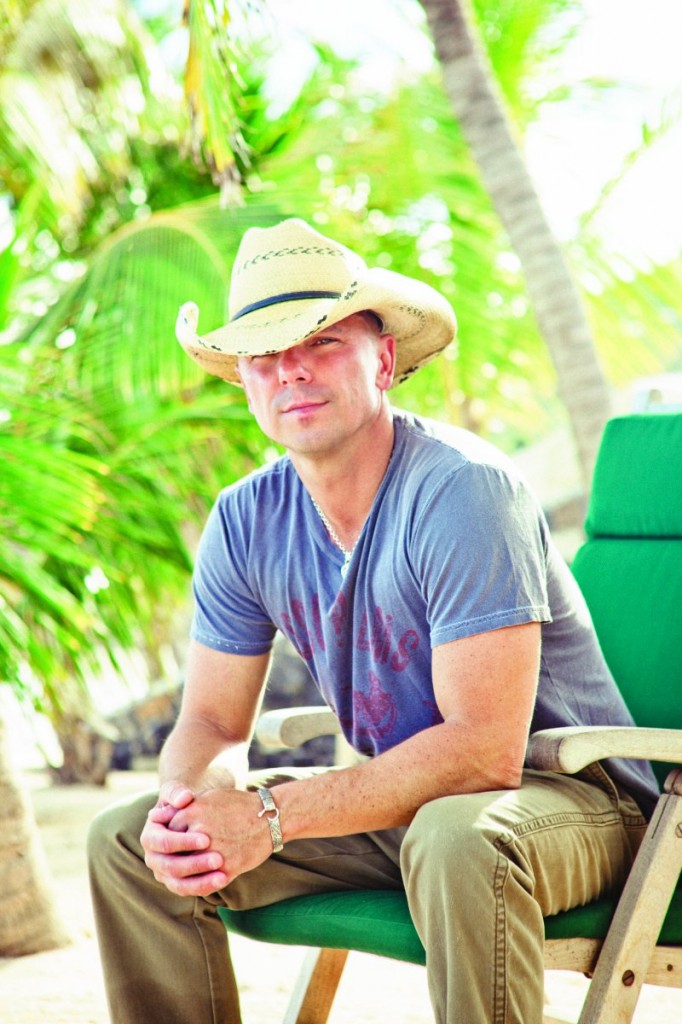 It’s finally here! Today marks the release of Kenny Chesney‘s new album, Welcome to the Fishbowl, featuring a dozen tracks including Kenny’s sizzling new song, “Come Over,” as well as the album’s first hit single, “Feel Like a Rock Star” with Tim McGraw. Co-produced by Kenny, Welcome to the Fishbowl is a collection that Kenny regards as the most emotional album he’s ever recorded — and whether or not he’s the person writing the songs, Kenny says that one of the joys of making music is being able to reach out to listeners with songs that connect on an emotional level.

Kenny Chesney believes that you never know just how much a song may affect someone. “You know, the great thing about songs…I know what that song means to me. Yeah, whether I wrote it or not, I go in and record that song. But somebody that hears it, it may touch a heartstring or an emotion that you didn’t even think about. And that’s what songs do.”  Chesney continues, “I mean, it…they…songs mean and music itself means different things to everybody that hears it. It just does, you know? And that’s why people still love songs, you know? And songs that make ‘em feel somethin’. And that’s the joy of bein’ a songwriter and being an instrument that takes a great song and shoots that song emotion into somebody’s heart because you never know how that song’s gonna touch someone, or how it’s gonna make ‘em feel.”

From online videos to social media and beyond, Kenny says that his album title track, “Welcome to the Fishbowl,” was inspired by the fact that we’re all living in a much smaller world these days. “You don’t have to be famous to be a star, like it says in that song. You know, there’s a line in the…’Welcome to the Fishbowl’: ‘You don’t have to be famous now to be a star, just get caught on video, and there ya are.’ I mean, if it’s a kid in spring break dancin’ on a bar, or whatever, you know, (laughs) or if it’s somebody sayin’ they’re somewhere else, but they’re really over here and somebody seein’ that they’re over here and not somewhere else, that happens to all my buddies. (laughs) It’s happened to me! It happens to everybody, you know? So, the idea of that is so identifiable now, you know, and everybody’s walkin’ on eggshells because of it.”

Kenny says that one song in particular, the poignant “While He Still Knows Who I Am” — a song addressing the impact of Alzheimer’s disease — became his benchmark for the music on Welcome to the Fishbowl. “When I went into the studio to record ‘While He Still Knows Who I Am,’ I realized that I had a song that was gonna ground this whole record — that I was gonna be able to wrap the rest of the songs that I wrote or that I found for Welcome to the Fishbowl around ‘While He Still Knows Who I Am’.”  Kenny  goes on and says, “And that doesn’t always happen, ever in a record. I mean, you might have some songs that sound great together, but you don’t have that common emotion — that one song that just…that feels like it makes the record better just by itself. And I think ‘While He Still Knows Who I Am’ did that and started…and basically set a standard for the rest of the record, ’cause every song had to beat that or had to be at least that good, in my opinion, anyway. And that was hard to do because that’s an excellent song.”

When he’s choosing songs for a new album, Kenny says that he’s not only thinking about what to include and how to record it, but also what could sound really great when fans come to see him in concert. “A lot of these songs I have lived with for a while, and just in the sense of living with them for a while to figure out how I wanted to record them, and then living with them after I recorded them, living with them to see what’s gonna make the show and what’s not. And there’s so many levels to it. Bein’ in that driver’s seat to, you know, try to reach inside somebody’s heart live is a great seat to be in. And to figure out which songs of these that you think is gonna do it the most is a balancing act when you’re recording your record and when you’re done with it.”

Look for Kenny on TV this week, including performances on Thursday’s Late Night with Jimmy Fallon and Friday’s Today show, both on NBC. Catch up with Kenny on GAC this week, with part-two of Kenny’s interview with GAC’s Nan Kelley airing on this Friday’s Top 20 Country Countdown at 8pm, ET, and look for him on the June 19th edition of On the Streets, premiering at 10am, ET, with additional airtimes for both shows online at GACTV.com. Go behind the scenes with Kenny in the creation of his album on Kenny Chesney – Making of “Welcome to the Fishbowl” – airing now on CMT. Check out airtimes at CMT.com, where you’ll also find the first of a two-part CMT Insider interview with Katie Cook, online here.

Kenny and Tim McGraw are currently headlining their ‘Brothers of the Sun’ stadium tour, with special guests Grace Potter & The Nocturnals and Jake Owen — look for an upcoming date near you at KennyChesney.com! Also online at KennyChesney.com, check out Tales from the Fishbowl, a series featuring exclusive commentary from Kenny about the songs on his new album, as well as Kenny’s day-of-show blogs from the ‘Brothers of the Sun’ Tour!

If you haven’t picked up your copy of Welcome To The Fishbowl yet, head over to iTunes and download the album by clicking HERE.