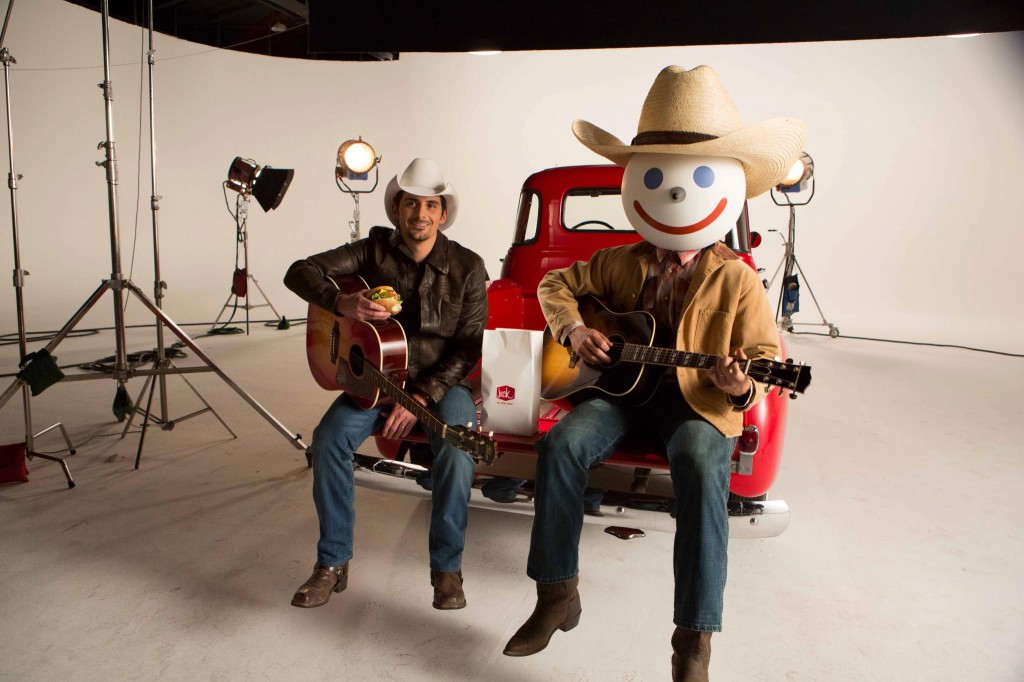 Jack in the Box® restaurants and its beloved, round-headed founder, Jack, have gone a little bit country in a new TV campaign co-starring country music super-star, Brad Paisley. The first two spots, Contract and Jack Does Country, are set to air beginning June 7th in the Southeast, followed by a third spot breaking system-wide at the end of June.

While signing autographs, Paisley accidently signs on to become a spokesperson for the burger chain and unexpectedly becomes a fan of Jack in the Box and its famous Jumbo Jack® burger. With a new burger recipe catering to Southern palates, and a thumbs-up from Paisley, the Jumbo Jack with cheese will be the star of a down-home burger-sampling tour featuring the Jack Burger Truck taking a trip across the Southeast and a Free Burger Day on June 13th at the chain’s 67 locations in Charlotte, Baton Rouge, Nashville and Greenville.

“We approached Brad Paisley to join Jack in this upcoming campaign because of his all-American music and his witty sense of humor. We are excited to introduce his loyal country music fans to Jack in the Box,” said Terri Funk Graham, Senior Vice President and Chief Marketing Officer for Jack in the Box. “It’s going to be a lot of fun working with Brad and actively participating in our local communities to share our better burgers with current and new customers.”

“I’ve always liked Jack in the Box’s clever, irreverent advertising and the personality of its slightly offbeat founder, Jack,” said Brad Paisley. “When they asked me to be part of this campaign, I was flattered.”

The Jack Burger Truck, a 26’ long chromed-out rig serving the tasty Jumbo Jack with cheese (a jumbo beef patty topped with 2 slices of American cheese, lettuce, tomato, pickles, chopped onions, mayo-onion sauce and ketchup on a sesame seed bun) will be hitting some of biggest and best events in the Southeast, perhaps even featuring appearances from Jack himself.

The vehicle will embark on a five-month tour visiting some of the region’s most popular and high-profile events—including music festivals, college football games, celebrity golf tournaments, community events and awards shows.
In addition, on June 13th, residents of Upstate South Carolina, Baton Rouge and surrounding areas, Middle Tennessee, and the greater Charlotte area will be treated to a free Jumbo Jack with or without cheese (with any purchase) at their neighborhood Jack in the Box. Locals can taste for themselves exactly why Brad Paisley is a fan of the burger chain too.