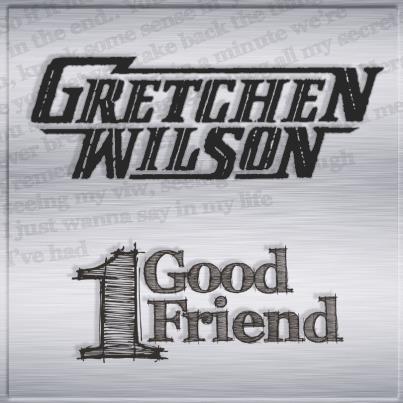 Gretchen Wilson is having the time of her life on the Gang of Outlaws Tour with ZZ Top and 3 Doors Down, and the current NRA Country Artist of the Month this week released her first new single in over a year. “One Good Friend” is currently available here on iTunes, and plans are in the works to ship the single to radio.

One of her most standout vocal performances, “One Good Friend” was written by Bekka Bramlett, Billy Burnette and Dennis Morgan. Gretchen produced the track with Blake Chancey, who also co-produced her recent cd I Got Your Country Right Here. That album yielded the Grammy-nominated “I’d Love To Be Your Last.”

“The first time I heard this song it blew me away,” said Gretchen. “The lyric hit me really hard, and fans at the ZZ Top shows are telling me it’s doing the same thing to them.”

Gretchen hit the road on the Gang of Outlaws Tour last month, and it runs through the end of June. Fans can catch her between each act signing autographs at her merchandise booth.

“It’s been a blast out there,” she added. “People are coming up to me and saying, ‘I’ve never heard of you, but I’m buying all of your music!’ This has been a great opportunity to get out and hit a totally new audience.”

Fans of Gretchen currently have the opportunity to purchase an exclusive VIP package on The Gang of Outlaws Tour. Included in the package is an exclusive meet & greet with Gretchen on her tour bus, a VIP-Only Laminate, a guaranteed ticket in one of the first 15 rows of the concert, one-of-a-kind Gretchen Wilson Box Set, personal photo taken with Gretchen, and an autographed copy of her critically-acclaimed I Got Your Country Right Here album. For additional details or to purchase a VIP Package, visit  www.GretchenWilson.com.

NRA Country recently named Gretchen its June Artist of the Month. She joins some of country music’s biggest artists who have teamed up with NRA Country to celebrate their support of our brave men and women in uniform, appreciation for the great outdoors, and love of family. As part of the June promotion, fans can register to win an amazing prize pack including an autographed I Got Your Country Right Here Deluxe Box Set, T-shirt, hat, picture and a personal phone call from Gretchen. Fans can visit www.nracountry.com/this-is from now through the end of June to register to win.