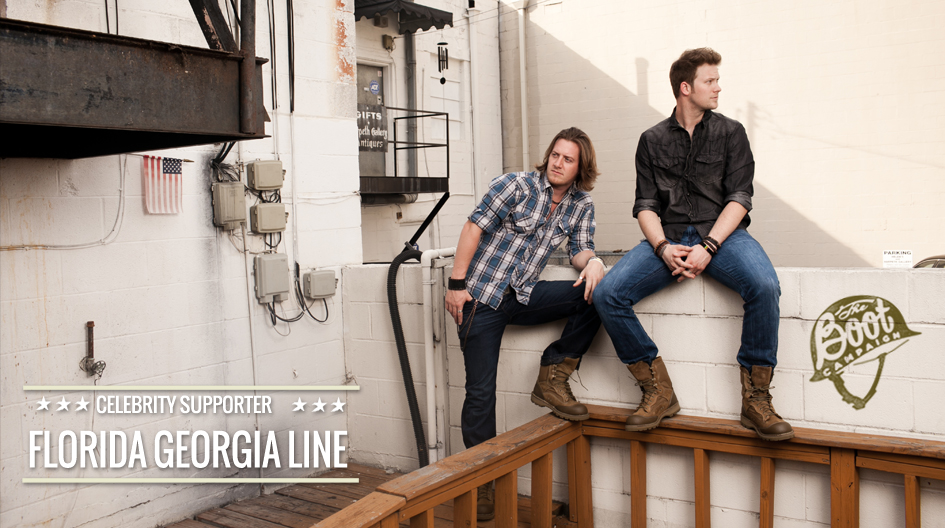 Florida Georgia Line is proud to support the Military non-profit The Boot Campaign. The up and coming country rock duo’s Brian Kelley and Tyler Hubbard have pledged their commitment to the troops by putting on their own pair of Boot Campaign military issue combat boots and “taking a walk in a soldier’s shoes.”

Supporters of The Boot Campaign purchase boots with all proceeds going to partner military charities that help with a variety of both physical and emotional issues that returning soldiers face today. The Boot Campaign wants Americans to put the boots on to “symbolically walk in the shoes of our military men and women to remember their service and sacrifice.”

“Anything that we can do to help our soldiers past, present and future and their families, we are thankful to be a part of. This cause really hits close to home; my uncle and cousin both served overseas and my grandfather was awarded two purple hearts during his active duty. We are proud to be a part of The Boot Campaign and thrilled to have them on the road with us for the Country Throwdown Tour. We hope to see all the country fans at the show put their boots on and join us in supporting our veterans as they return home,” shares Florida Georgia Line’s Brian Kelley.