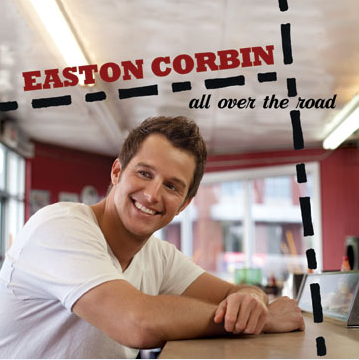 Mercury Records recording artist Easton Corbin will release his highly anticipated second album titled All Over The Road, on Sept. 18. The 11-song set includes the fast-rising single “Lovin’ You Is Fun” (written by Bob DiPiro and Jim Beavers) and was produced by celebrated producer Carson Chamberlain (Billy Currington).

“‘All Over the Road’ is a fun title,” Easton contends, “but it’s also actually what we’re doing out there. We’re all over the road trying to get music out to everybody, so I just thought it made sense.”

All Over The Road further cements the Gilchrist County, Florida native’s place in today’s country music as a torch bearer for traditional songs. With songs such as the opening title track “All Over The Road” (written by Carson Chamberlain, Ashley Gorley and Wade Kirby), the clever “Tulsa Texas” (Tony Lane, David Lee and Mike Lane) and the endearing “A Thing For You” (written by Easton Corbin, Carson Chamberlain and Tony Lane), Easton reminds you who his influences are: Keith Whitley, George Jones and Merle Haggard.

All Over The Road is the follow-up to Easton’s acclaimed self-titled debut that Mercury released in 2010. Easton Corbin spawned back-to-back #1’s with his first two singles – “A Little More Country Than That” and “Roll With It” – making him the first country male artist in 17 years to have his first two consecutive singles reach No. 1.

Entertainment Weekly said “He is singing old-school songs, full of wit and heart,” and “It sounds effortless…sit back and remember why you fell in love with country music in the first place.” Billboard named Easton the Top New Country Artist of 2010 while People stated “…sounds like the second coming of George Strait with his neo-traditional tunes.”

Don’t miss Easton touring in support of All Over The Road with opening slots for Brad Paisley on the Virtual Reality Tour.  For a list of tour dates and all things Easton, visit his official website www.EastonCorbin.com.