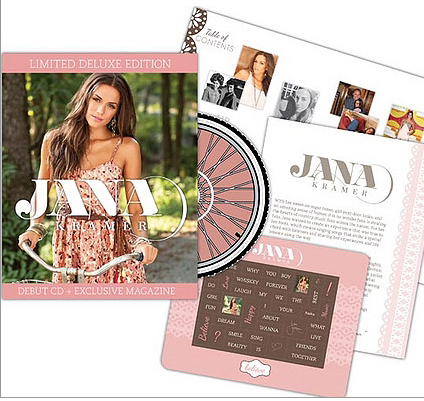 Rising country star Jana Kramer released her self-titled debut album on Elektra Nashville, June 5th, which features her Top 20 debut single “Why Ya Wanna”. Fans are also able to purchase her limited edition deluxe ZinePak (ZEEN-pack) version of the album only at Walmart stores and on Walmart.com. Jana Kramers ZinePak pairs the full-length album with a 60-page magazine filled with exclusive interviews and dozens of never-before-seen photos. The package also includes a magnetic photo frame with 40 break-away message magnets.

Thanks to our friends at ZinePak, we have TWO AUTOGRAPHED Jana Kramer ZinePaks to give away! To enter to win, please fill out the form below.  Two Winners will be randomly selected after contest closes on July 6. One Entry per person. Good Luck!

Jana Kramer is on Brad Paisley’s Virtual Reality Tour supporting her release, performing on the Virtual Opry Stage through this fall. Tour dates can be found on her site www.JanaKramer.com.

Pick up your Limited Edition Jana Kramer ZinePak at your favorite Walmart Store or purchase online at Walmart.com.